Vietri sul Mare: the cradle of the pottery famous all around the world 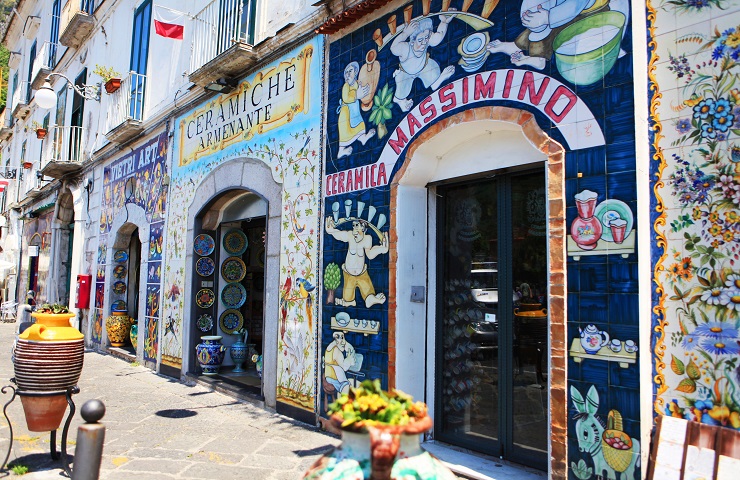 From 1997, municipality of the province of Salerno, Vietri sul Mare has been declared World Heritage Site by Unesco for the richness of its landscapes and its artistic and cultural heritage.

Historically, Vietri sul Mare had been identified with the ancient Marcina, first Etruscan-Samnite coastal settlement, then Roman port, but even today, there are several hypothesis about it. It is surer that its history, until 1806, has been associated to that of Cava de’ Tirreni of which it was hamlet: Marina di Vietri, in fact, was used by the friars of the Abbey as commercial port for the exchanges above all with the zones of the South of Salerno, those of the ‘Sele Plain’. Then, in 1944, when Salerno became capital of Italy for some months, King Victor Emmanuel III stayed in the near Villa Guariglia, in the hamlet Raito.

The history of Vietri sul Mare is complex and fascinating as well as the beauties of the places that characterize them. In fact, there are many monuments to visit and places of cultural interest: from the Parrocchiale of Saint John the Baptist to Villa Guariglia, from the Tower of Marina di Vietri to the Bridge of Molina until the Factory of ceramics Solimene, example of organic architecture of the second postwar realized by Paolo Soleri, which inside stores a vast collection of contemporary pottery.

Exactly the pottery, one of the typical products of Vietri sul Mare, has made the town famous all around the world: the industry of the pottery made inroads in the late Renaissance thanks to the Princes Sanseverino and from then has always been a symbol of Vietri sul Mare.

The Pottery of Vietri sul Mare are real masterpieces, result of a centuries-old tradition, continued only in some villages of the Amalfi Coast, and represent one of the excellent products of these places. In many little maritime hamlets, the artistic ceramics decorate alleys and streets, making the urban and coastal landscape even more suggestive. Therefore, the procedure of production is very long and complex, with a first phase of molding of the clay with the lathe, in which it is given the shape and the structure of the work, a second phase of cooking in oven and a following phase of glazing. Once made this, the dishes and the tiles of ceramic of Vietri are immersed in a white polish, made drying and only then handy decorated. The colors will be brighter thanks to a second cooking that will fix the drawn artworks.

Their most extraordinary feature is that each pottery is a unique piece, there are not doubles.

Still today, the production of the best ceramics of Vietri continues in the several artisan laboratories, preserving a sometimes ultra-centenarian family tradition. 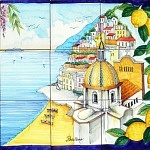 A wonderful example of ceramic of Vietri, feather in the cap of the town.