The Great Water Show of Monteverde 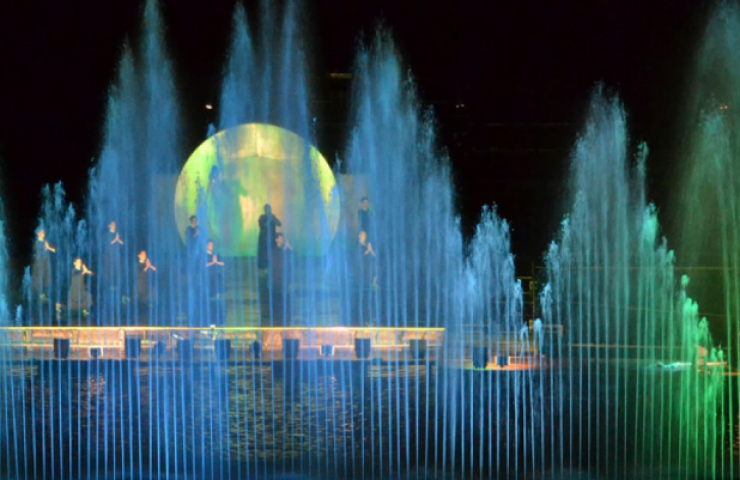 Monteverde: a suggestive place and a spectacular show

When the water curtain opens, the game of lights, colors, fountains and musical arches accompany the actors, the corps de ballet and the intense voiceovers in an emotional journey, where the tale ties itself to the dream. It is a great show with water games that goes on in the naturalistic oasis of San Pietro Lake, at the bottom of the little village of Monteverde.

The text is based on the life of Gerardo Maiella, the Saint of the people, the man who without hesitation has put his own faith at the service of the humble and last people: ‘All began here. From this land. A land of arid rocks and luxuriant countries, of subterranean waters and unexpected mountains, where the same light has a color of another color’. Through the dialogues, the life of Gerardo beats the rhythm of the narration, giving us a reflection about the same essence of humanity.

Therefore, a great show that goes on entirely in the water in a wonderful nocturnal setting, with surreal choreographies, wonderful music and an exceptional game of lights and fountains.

In the afternoon, in the little village of Monteverde, there is also an Air Show, during which you can participate in a series of exhibitions of winged animals and birds of prey with falconer masters. Naturally, it is obligatory a visit to the wonderful village among uphill lanes that reach the Castle, from whose top you can enjoy a spectacular view on the entire zone.

The Great Water Show, during the years, has known how to conquer the heart of the spectators, believers or not, thanks to a majestic stage structure, capable to use the water of the artificial potting of the dyke of S. Pietro to create impressive scenic effects, which remember, in a modern version, the suggestions of the eighteenth-century theatrical machines.

The show has the purpose of financing charity works in favor of needy people in Italy and abroad.