The death of Tatone, the mask of the Carnival.

In ancient times, as in all the Municipalities of Irpinia, the Carnival started, let us say officially, on January 17, the day of Saint Anthony the Abbot.

Around this saint, there was a tradition: they carried house by house a little pig, called ‘porcellùzzo ‘e sant’Antònio’ (Saint Anthony’s little pig); where it stopped, people gave it food. The Carnival finished on the Tuesday before the Ash Wednesday, with the celebration at midnight of the death of ‘Tatóne’, that is the death of the mask that personifies the Carnival. From this tradition, it is born in Taurasi the custom of young people to disguise as nurses and doctors, and then they go through the center staging the funeral of Tatóne. The ritual, between the macabre and the profane, includes the procession with the typical moans of the funerals, saying these words: 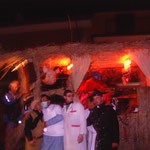 At every stop, they eat, drink and dance. Then, when it is very late, the happy group says good-bye and arranges to meet the following year.

The tatoni (‘tatuni‘ in dialect) are dry cookies typical of Irpinia. They are classical cookies of the feast of the period of Carnival. Its name comes from the carnival Tatone.