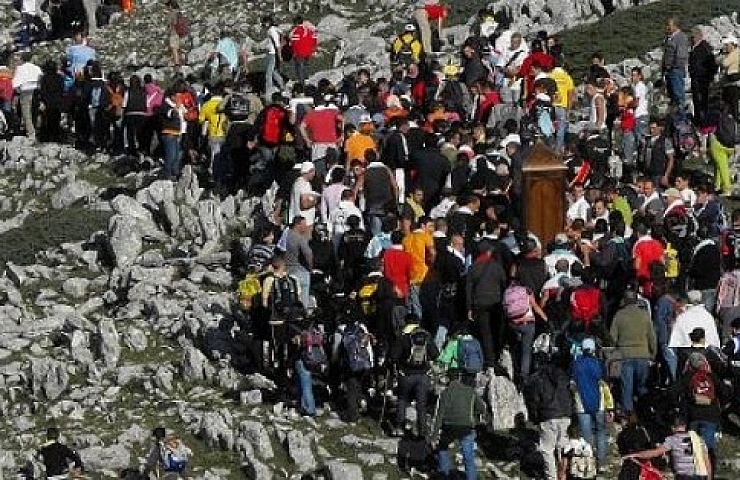 Faraway from the noises of the earthly life, secluded on Mount Cervati, in the territory of Sanza, the house of the Archconfraternity of Saint Mary of the Snow rises up.

The shrine of Sanza, built around the X century, as it can be read in an epigraph conserved there, has a plant compliant with the period of building: essential and linear with walls thick more than 2 meters, unlike the most external part added about six centuries later, which presents lighter and thinner walls.

Near the shrine, there is the characteristic rocky and narrow cave that stores the ancient wood statue of the Virgin Mary, of strong religious attraction. The zone is destination for hundreds and more pilgrims between July and August for the centennial feast dedicated to the Virgin. All starts in the night of July 26, when the bells announce the imminent exit of the statue.

The entire citizenry is awake ready for the advent. Ended the Mass, the sky fires up with the thousand colors of the fireworks and they begin the procession for Mount Cervati, towards the chapel of the Virgin Mary built in her honor. The statue remains there until 4 o’clock of the morning of August 5, when it starts the return pilgrimage to the sanctuary. Greeted the Virgin Mary to the next year, the celebration continues with the explosive fireworks.

The statue stored in the cave, made of mortar and plaster, according to a late medieval tradition largely attested in Cilento, probably substitutes a more ancient image venerated since the Early Middle Ages by local shepherds and maybe eastern monks.