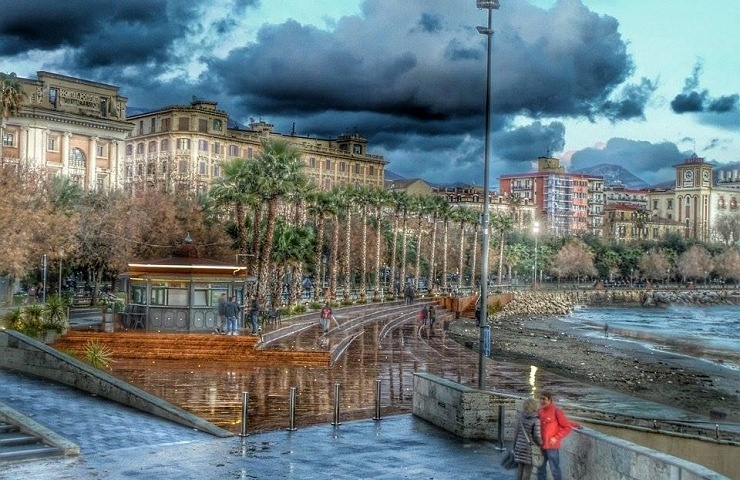 The beach of Santa Teresa has been inaugurated in September 2015.

From last September, on every Sunday, it is crowded with the people of Salerno who, with any weather condition, choose to enjoy the tranquility of the town promenade. Nevertheless, the patio of Santa Teresa also enters legitimately the yearned destinations of those who reach the center of Salerno, above all during the day.

It is the most famous urban strand that, thanks to its restyling, now appears, if not wider, at least much more pleasant for the eyes.

Cleaned, neat, preceded by a solarium of 1,600 square meters realized with thick teak staves, equipped with showers and shady on the promenade side by tall Washingtonia palms put as a colonnade, and by a system of flowers and plants on both the sides of the deck.

The result is a perfect dialogue between the artifice of the wood and the nature of the beach. The Old Town Center of Salerno has reconquered the relationship with the sea and with an extraordinary simplicity of planning lines.

This intervention is part of a wider project of requalification, which includes Piazza della Libertà, the Crescent, the Maritime Station and the new Diana Theatre: an aesthetic district destined to become an absolutely excellent point of tourist attraction.

The planning organization has respected the geometries of the Promenade and of Piazza della Libertà integrating them to create continuity between the two urban spaces. The formal, linear and measured choice has opened the Promenade to the sea through a path that goes gradually towards the shore. You can pass from the Promenade to the shore without steps or obstacles, the ramps and the stairs become an only, pleasant and gentle walk through the sea with a slight slope of 2,5%. The size of the stairs allows that they can be used as seats as well as solarium. The continuous level of 1,600 sq. m. is realized with teak staves.

From last September, there has been a real social phenomenon, with the run to the new shore for the first selfies on the stairs of the new work that lead directly from the promenade to the beach. The many photos tell ‘Presso Barcelloneta’, with hashtags to immortalize the suggestive wood flooring.