Among the many historical zones of Naples, one of the most known quarters is the historical Rione Sanità, placed at north of the viceroyal wall of Naples, at the slopes of the hill of Capodimonte.

Historically and artistically very rich, Rione Sanità was built at the end of the XVI century tightening immediately a mysterious bond with the death, becoming seat of numerous Early Christian catacombs and, later, of the cemetery of the Fontanelle where the victims of the big plague of 1656 were buried.

Initially, Rione Sanità had been created to host the important noble families and the wealthy bourgeoises of the city, but during the years, it has become one of the most popular zones of Naples.

With all the problems that obviously follows and that, in the years, have made Rione Sanità a place sadly known also for its social marginalization, unemployment and organized crime.

Nevertheless, there are wonderful places in Rione Sanità from the artistic point of view. It is enough to think about the numerous Palaces, from Palace dello Spagnolo to Palace Sanfelice or Palace Traetto. As well as the Churches and the religious complexes like the famous Borgo delle Vergini, a splendid baroque hamlet where there is a prosperous open-air market.

Then, in the latest years, Rione Sanità has become a cult place also from the point of view of the street art and point of reference for many international artists.

Francisco Bosoletti, for example, is an Argentinian artist who, in Rione Sanità, has realized the famous artworks ‘RESIS-TI-AMO’ that dominates on the side façade of the Basilica of S. Maria della Sanità.

The message of the artist with his wall painting is that ‘love fights, love resists, love wins’. Moreover, it is the first wall painting in Italy realized on a façade of a religious building and that takes inspiration from the real stories that Bosoletti has met in the streets of Naples.

Another artist who has found in Rione Sanità the perfect background for his street art is Tono Cruz.

Cruz has realized, in collaboration with the children of the district, a big wall painting entitled ‘Light’.

This is the first project of Street Art in Rione Sanità curated by the association ‘Il Fazzoletto di Perle’, realized in collaboration with Fondazione di Comunità San Gennaro and sponsored by the Municipality of Naples. The initiative is part of a wider project that sees the local community working to promote the art from all the points of view, also from that decisively young and modern typical of the street.

The title ‘Light’ is not casual: the artwork dominates on the wall of the building in front of the Basilica of S. Maria della Sanità and covers almost completely the façade with the round wall painting that seems almost a beam of light.

Subjects of the artwork are the faces of the boys and girls of Rione Sanità, of its streets and alleys, which seem to represent a light of hope for the future and the entire community.

One of the artworks by Bosoletti in Rione Sanità 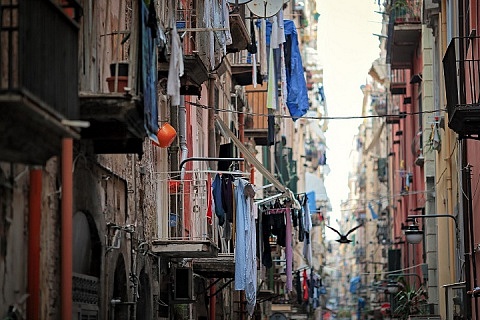 Naples is a big city, known and appreciated all around the world. Singers and poets, writers and...