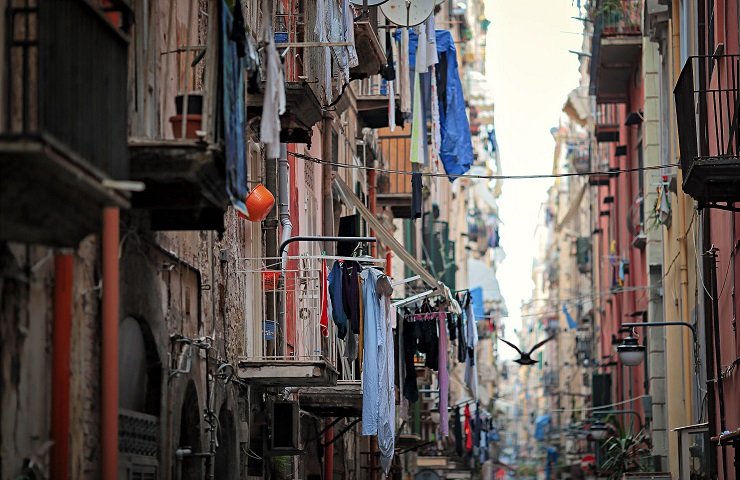 Naples is a big city, known and appreciated all around the world. Singers and poets, writers and painters have fallen in love with it, eternizing its beauties and history in writings and paintings.

Nevertheless, beyond the Vesuvius and the most known monuments, Naples has also a vibrating heart that lives inside its districts and quarters.

Among these, there are also the famous Quartieri Spagnoli.

Geographically, the Quartieri Spagnoli rise in the historical part of the city of Naples and are constituted by the quarters San Ferdinando, Avvocata and Montecalvario.

But, why are they called ‘Spagnoli’? The name is strictly linked to their birth, happened around the XVI century to host the Spanish military garrisons designated to the repression of eventual uprisings of the Neapolitan people. Nevertheless, the Quartieri Spagnoli represented also the place where temporarily those who passed for Naples to go to other places of conflict stayed.

Unfortunately, during the years, their fame has been linked to events of crime news and criminality, but in the last years, finally, this zone is living a second life thanks to a slow but progressive rehabilitation process.

In fact, to the folklore typical of these places, bars, fish and fruit and vegetable markets and even an underground line have been added. All this has contributed to give again a few of ‘healthy’ life to this historical zone of Naples.

Not only: the Quartieri Spagnoli are very rich from the artistic point of view and enjoy the presence of numerous artisan shops, spectacular alleys and, of course, wonderful Churches.

The typical folklore of the zone is linked also to the wonderful Wall painting dedicated to the football idol of the city of Naples, that is, Diego Armando Maradona.

In fact, last March, after the restoration works, the wall painting dedicated to the Argentinian football player has been inaugurated with a great party.

The artwork has been possible thanks to a collection realized by merchants, residents and artisans of the Quartieri Spagnoli that have allowed restoring the painting by the perished artist Mario Filardi who, in 1990, realized the impressive drawing on the wall of the palace of six floors in street Emanuele De Deo. 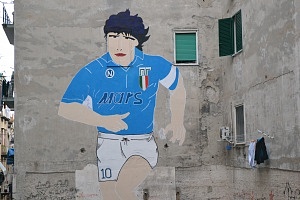 The famous wall painting of Maradona