The island of Procida, ideal destination for the romantic tourist 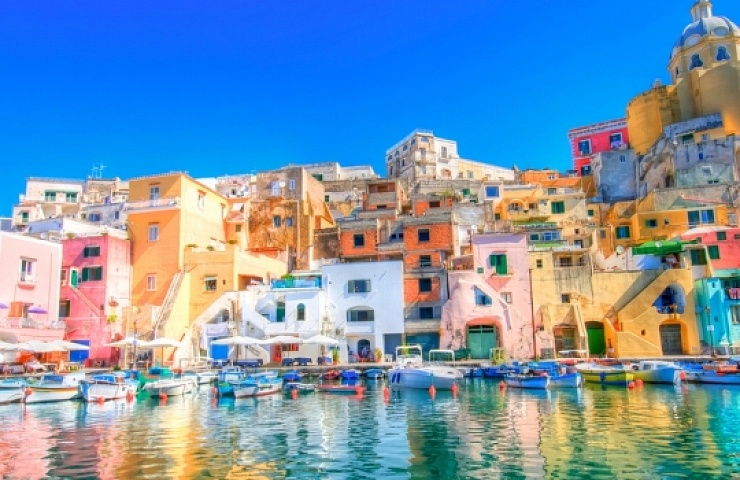 Undoubtedly, Procida is the least known among the islands of the Gulf of Naples but those who visit it fall in love… because the island has its own unique and complete identity.

In fact, Procida has never adapted to the mass tourism and maintains its extraordinary originality.

Some of its scenarios have entered the tourist unconscious also thanks to the cinema. Unforgettable some scenes of Il Postino by Troisi, which has contributed a lot to recall tourists from every part of the world.

Put in the middle between the island of Ischia and the Neapolitan coast, Procida belongs to the group of Phlegraean islands.

To reach Procida, it is necessary to pass the canal with the same name that separates it from Capo Miseno and Monte di Procida.

The arrival harbor is Marina Grande. One of the most aspired places by the tourists is the wonderful Marina Corricella, a show of colored houses that looks out in disordered and romantic way onto the sea. Marina Corricella is the harbor of the fishermen, where you breathe an ancient atmosphere. A special place for those who love taking picture.

In Procida, you can immerse in the little streets with houses bundled one on the other, in the fishermen’s boats in the small ports. A particular and steep alley is the stairs of the Pennino.

The cultural heart of Procida is the hamlet of Terra Murata, a little village on the north-east point of the island. Terra Murata is almost 90 meters high in its highest point. To reach it, it is necessary to follow the steep slope to the Castle. The view from the top rewards the effort of the route: the wonderful and multicolored view of the houses of the Corricella.

Strolling in the hamlet of Terra Murata is a real pleasure: interesting glimpses, narrow alleys, typical houses, the Abbey of St. Michael Archangel, the Castle of Avalos…

Therefore, Procida gives the romantic traveler a landscape and atmosphere remained untouched in the time.

Even its weather is wonderful and its beaches are little and characteristic. This makes it ideal destination also for the seaside tourism.