The ‘period in Maiori’ of Roberto Rossellini

‘The people of the Amalfi Coast are crazy, drunk of sun! But they know to live with a strength that few of us have: the strength of the fantasy’ (Roberto Rossellini).

Roberto Rossellini has chosen Maiori as location to shoot some of his most famous movies: ‘Paisà’ (1946), ‘Il miracolo, second chapter of L’Amore’ (1948), ‘La macchina ammazzacattivi’ (1948), ‘Viaggio in Italia’ (1953). During the shots, the famous director could count on the suggestive beauty of the landscape as well as on the availability of the entire town. 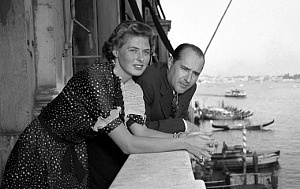 Some of the protagonists of his movies are authentic Maiori’s inhabitants and have been chosen among the characters of the real life. Among these, Alfonso Bovino, the ragamuffin protagonist of the ‘Neapolitan’ episode of the movie Paisà, chosen among the onlookers while they were shooting at the Norman tower, and the friars of the monastery of Saint Francis who Rossellini wanted as actors in ‘Francesco giullare di Dio’.

Since 2000, in Maiori, it is celebrated ‘The Roberto Rossellini International Award’, organized by the Maiori Film Festival Association.