The Palio of the Halberd in Gesualdo

In August, in Gesualdo it takes place the Palio of the Halberd.

The event of the Palio remembers an important happening of the history of the town, that is, the absolution between Prince Carlo Gesualdo and his son Emanuele on March 2, 1609.

Emanuele married in Bohemia, on October 22, 1607, the beautiful Mary Polissena of Furstenberg et Pernestan, his ill father could not participate in the marriage.

After the wedding, his son, accompanied by the bride, goes back to Gesualdo to greet his father who is waiting for him in the castle with his second wife Leonora. Between Carlo and Emanuele there has never been a good relationship because Carlo, even if obliged by the law of honor, had killed his mother, Maria D’Avalos. The prince, happy, institutes the Palio of the Halberd. The following day, the feast continues and the knights of the four quarters compete for the prize with a horse joust and an arch competition. 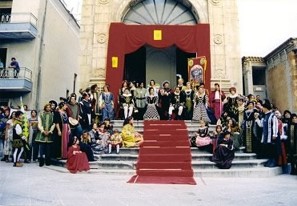 The historical absolution is reconstructed on the churchyard of the Cappellone in a wonderful scenery and with the participation of more than 200 actors, including the 2 couples of princes: Carlo Gesualdo and Leonora d’Este, Emanuele Gesualdo and Polissena Furstemberg, two Cardinals, the couples of nobles of the four quarters (Canale, Cappuccini, Fiera, Piazza), archers, halberdiers, knights, flag wavers, drummers and trumpeters.

At the end of the celebration, the Halberd is given to the winner who preserves it until the following celebration.