In Materdomini, the Shrine of Saint Gerardo 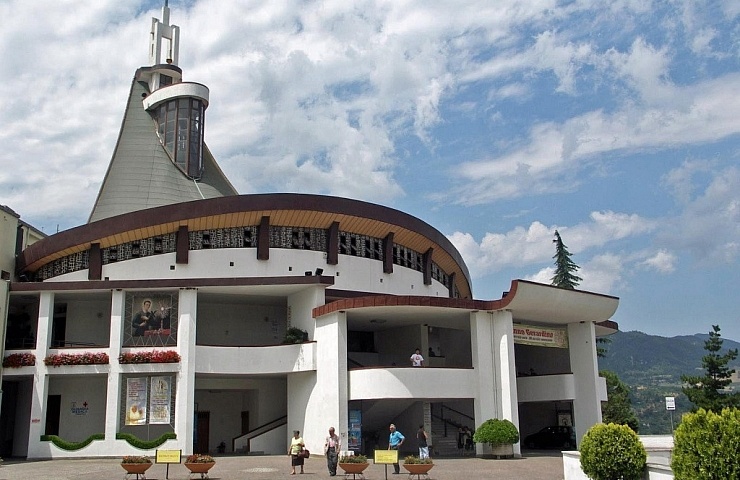 The Patron Saint of mothers and children

The Shrine of Saint Gerardo Majella rises on the hill of Materdomini in the High Valley of Sele, in province of Avellino.

San Gerardo Majella arrived in 1754 at the convent of the Redemptorists friars founded by Saint Alphonsus Maria de’ Liguori. In Materdomini, he dedicated himself with infinite devotion to alleviate the sufferings of the poor people. During the famine of winter 1755, Gerardo assisted the starving and frozen people who from the icy countryside poured out at the doors of the convent. During his brief missionary experience, he helped the poor, relieved the suffering people and gave support to the outcasts. He made many miracles and was advisor of souls. Gerardo is remembered for the extraordinary gifts of bilocation, prophecy, rapture, visions and infused knowledge.

Moreover, they do not lack episodes of sanctity among which we remember the one of the ‘fishermen’s trawler’ that was about to sink and St. Gerardo rescued it rushing bravely into the rough waves of the sea. After his death on October 16, 1755, the fame of sanctity spread rapidly. On January 29, 1893, Pope Leo XIII beatified him in Rome. With the Beatification, the pilgrims ran to his grave and the redemptorists thought to enlarge the little temple dedicated to the Virgin. The Blessed became then Saint Gerardo Majella after the canonization made on December 11, 1904 by Pope Pius X.

In 1974, a new shrine was built with wide rooms to worthily welcome the pilgrims.

The shrine was of neoclassical style with Latin cross and three naves. The feeble light that filtered from the windows historiated with episodes of the life of Saint Gerardo made the environment evocative and charged with sacredness. Unfortunately, the terrible earthquake in 1980 destroyed everything. The new Shrine was reopened for the worship in 2000. In the central and the lateral naves, the restored ancient altars have been located.

The urn with the body of the Saint has been put at the foot of the presbytery. A marble sculpture that represents Saint Gerardo among the people has been put in front of the urn. The Relics of the Saint, the altar and the throne of the Materdomini stand out immediately for the pilgrim that enters the Church.

Many Neapolitans go there to ask for a grace or testify it. In particular, the much frequented ‘Sala dei fiocchi’ (bows room) has a great success. It keeps thousands and thousands of photos and blue and pink bows put by the parents of children who have received a miracle or a grace by the Saint, especially venerated by the mothers. Gerardo Majella was born in Muro Lucano, in province of Potenza, in 1726. He died very young, just at the age of 29. His life was intense, lived in the love towards Jesus Christ.

The ‘book of the signatures’, at the first floor of the Shrine, is always full of prayers and invocations written by devotees coming from all over the world. The Museum dedicated to him is suggestive with background music and lights that automatically start when the visitors enter.