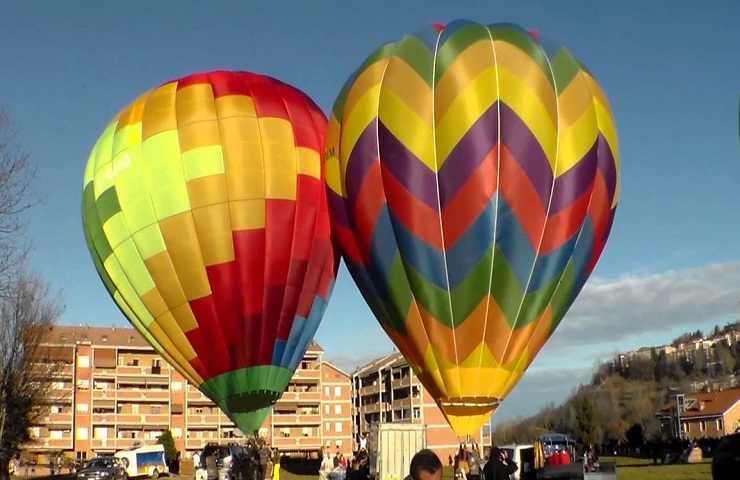 There is nothing more poetic and dreaming, among the alternative means of transport, than a hot-air balloon.

Even its history is fascinating! The first documented flight of a balloon able to transport people happened on October 19, 1783 in Paris. That kind of balloon, still under improvement, used hot air to float in the air. Joseph-Michel and Jacques-Étienne Montgolfier created it in Annonay. Instead, in Italy, the pioneer of the aerostatic flight was the count Paolo Andreani.

For this reason, every year, the fans of this particular aircraft meet to celebrate their passion. One of the most interesting meetings is surely that of Fragneto Monforte, in province of Benevento.

Situated in High Samnium, at the foot of Toppa Barrata and between the rivers Tammaro and Calore, near the streams Lenta and Raventa, Fragneto Monteforte has a mainly hill territory. The name Fragneto seems to go back to the family of Gnito. He was a warrior who, after the conquest of Benevento by the Lombards in 571 AD, settled in this place making it a village fortified with walls and towers.

From 1987, Fragneto Monteforte is theater of a hot-air balloons international meeting, generally held in the first week of October.

Probably, the idea is born from the aerostatic passion of the Duke of Fragneto and the collaboration of the municipal administration. The latter, thanks to the common enthusiasm and friendships inside the Aerostatic Club of Geneva, wanted to share the emotion of the flight with the citizenry of the place.

Then, during the annual meeting, Fragneto Monforte livens up thanks to a wise mix of events, music and shows. Numerous food and wine stands are distributed along the streets of the village. Street artists, clowns associations and extemporaneous art exhibitions enrich the town to entertain citizens and visitors. During the meeting, the most expert teams make several competitions in hot-air balloons. In addition, they do not lack acrobatic exhibitions of airplanes, skydivers and exhibitions of bands and fanfares, among which the Fanfare of the  Bersaglieri.

Therefore, an event in the event that succeeds in keeping, year after year, such a prestige and an importance that attracts hundreds of thousands of visitors. With the time, this event has become a fundamental occasion to make better know the history, the culture, the traditions and the beauties of the territory. It has made Fragneto Monforte a point of reference for the enhancement of this important community of Benevento. This is the most enduring and important meeting-event of Italy. Therefore, a further occasion to visit the town of Fragneto Monforte and maybe, experiment the aerostatic flight. 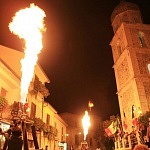 The suggestive burners to heat the air of the hot-air balloons in the square of Fragneto Monforte.