In Campania, there are not only numerous natural oasis and protected reserves, but also many marine areas particularly important from the point of view of their richness and biodiversity.

Among these, there is the Marine Protected Area Coast of the Infreschi and of the Masseta, a protected natural area of region Campania instituted in 2009 that occupies a vast surface of the province of Salerno.

Geographically, the Marine Protected Area Coast of the Infreschi and of the Masseta stays between the municipalities of Camerota and San Giovanni a Piro, inside the National Park of Cilento and Vallo di Diano.

Therefore, a wonderful place from which the Coast of the Infreschi and of the Masseta takes big part of its peculiarities.

At territorial level, we have to mention the numerous underwater caves, among which the Cave of the Alabaster stands out, but also the wonderful beaches reachable only by boat: Sciabica, Spiaggia dei Gabbiani, Spiagge gemelle, Vallone di Marcellino (or French’s Beach), until arriving to Punta Escoletti, the area that looks onto the gulf of Policastro.

Here the wonderful sea alternates with the luxuriant Mediterranean scrub made of olive trees and vineyards, the cliffs and the medieval towers that contribute to create a breathless landscape of uncontested environmental value.

The point of main tourist attraction of the entire area is Porto Infreschi with its little beach, often mentioned as the most beautiful beach of Italy.

Obviously, the Marine Protected Area Coast of the Infreschi and of the Masseta has also a reach baggage of species present on its territory, from the point of view of both flora and fauna.

It is enough to think that in the marine area, precious vegetal formations and unique species are preserved such as the Primula Palinuri, but also species of birds among which a particular type of seagull called ‘u zifaro.

Joined to this place, rich of history and naturalistic attractions, there are also a series of legends, among which that of the Cave of the Lovers.

The legend tells that in the XIII century a couple of newlyweds, which were in disagreement with their families because of their relationship, had passed the honeymoon exactly in the Cave of the Lovers. Very famous is also the legend of the crusaders directed to Jerusalem who stopped in the harbor of the Infreschi. Here, it seems that they stayed so well that they did not want to leave anymore and the saints of the Heaven had to intervene to convince them to bring again their way to the Holy Land. 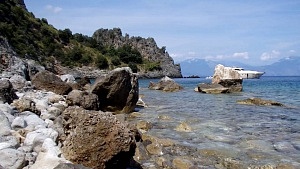 Cala Moresca, wonderful area of the Coast of the Infreschi and of the Masseta