Wandering in the suggestive hamlet of Casertavecchia 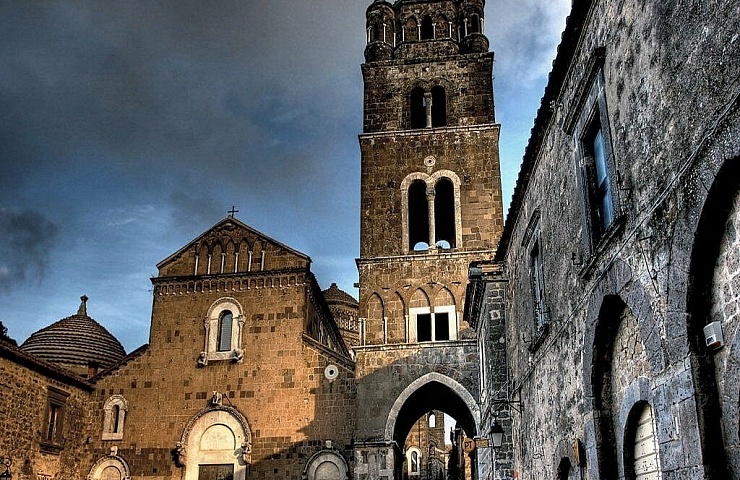 Casertavecchia is a medieval hamlet that rises on the slopes of the Mounts Tifatini. It is at about 401 meters of height and 10 km of distance towards North-East from Caserta.

Casertavecchia offers a pleasant guided itinerary to briefly present you the most characteristic elements, which make this medieval hamlet unique. Result of the fusions of several formal and artistic languages that meet from different parts and have been elaborated again by the architectural culture of that time, and that still today testify the extraordinary importance that the little hamlet has.

At the entrance of Casertavecchia the little chapel of Saint Roch rises, with its characteristic external structure with one only portico and a blind window with traces of frescoes. The chapel is a point of reference of the people of Caserta of the four hamlets, during the liturgical function.

Continuing the stroll, we find the most characteristic places of Casertavecchia. Following a characteristic lane, we arrive in Piazza del Seggio. From here, we can admire a first splendid view of the Royal Palace of Caserta and of the entire town.

Continuing, we arrive in piazza Vescovado with at the center the granite columns. They probably represent the privilegium immunitatis, or better said the right of asylum of the church. On the right of the square, we can admire the upper cathedral, traditionally called Duomo, dating back to 1129 in Sicilian-Norman style. At its side, the majestic tower bell, built 81 years later. The Duomo is oriented from West towards East, as established by the apostolic constructions of that time. It has decorations with various figures of animals, testifying the Longobardic taste and style.

In piazza Vescovado, also the Episcopal Palace looks out, decorated with ancient arches and windows of the XIII century.

Opposite to the Duomo it is possible to admire the once Seminary. In 1842, Pope Gregory XVI ratified its definitive transfer to Caserta and was transformed into Convent. The central Gate of the Seminary is realized with cipollino marble and Bishop Diodato Gentile’s coat of arms over.

Following on San Michele Arcangelo road, we arrive at the Church of St. James, with its wonderful tuff arches. The church was made built in 1178 by Roberto Sanseverino and di Lauro, count of Caserta.

Continuing on San Michele road, we arrive at Ferraiolo house. It is thought that before it has been the Church of Saint Paul, for its wonderful mullioned window.

From Piazza Vescovado, we can arrive also, through the big pointed arch at the bottom of the tower bell, to the Church of Our Lady of the Annunciation. It is an example of the several architectural culture that melt together in Casertavecchia. Built in the first half of the XVI century, then it passed on the background, probably for its nearness to the Duomo. The last restoration dates back to 1995.

Following the road always in the same direction, we arrive to the ruins of the Castle. Its building dates back to 861. In 879, it was fortified and also used as home. Finally, due to Normans and Swabians, it gradually assumed the aspect of Castle.

Gone out from the Castle, we arrive at the Belvedere. From here, it is possible to admire a splendid view of the Royal Palace. In the finest days, you can even see the sea on the horizon.

Our little walk ends in the pinewood. Here, it is possible to glimpse the remains that testify the ancient splendor of the medieval hamlet of Casertavecchia…