Cairano, a magical and surreal corner of Irpinia 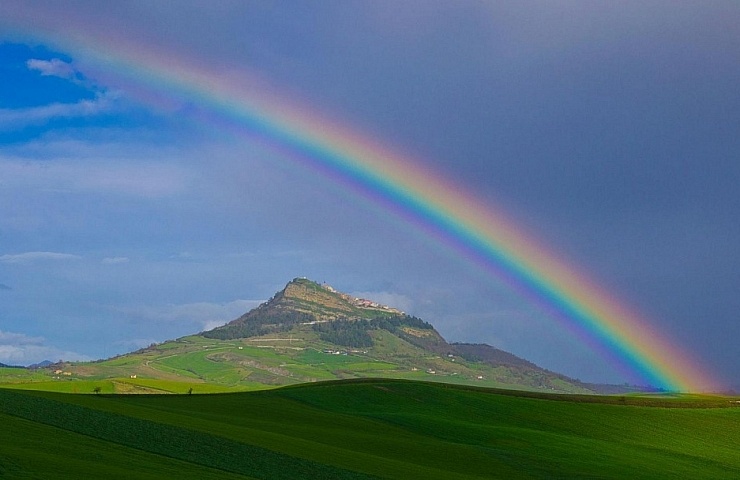 Getting lost in the village, talking with the local people, stopping to admire the immense landscape that you can enjoy from here means rediscovering the real and authentic sense of living an ancient village of Irpinia; not casually chosen as location in 1963 of a neo-realistic movie, ‘La Donnaccia’, directed by Silvio Siano.

At about 800 meters a.s.l., you can see Cairano, the ancient Castellum Carissanum on a cliff that dominates the entire Ofanto valley suspended between heaven and earth in a scenery of great fascination.  The village has very ancient origins as it is testified by a necropolis of the Fossakultur to whom it has been given the name of ‘Culture of Cairano and Oliveto Citra’ that gives evidence of the presence of the human being already before the iron age.

The place is ideal for the lovers of the gliding flight, who every year in the summer meet for the air festival (at the end of July), when many enthusiasts launch with the hang gliding or paragliding from the highest point of the village. In fact, Cairano, for its altitude and isolation, has a healthy air.

The little medieval village of Cairano develops around the Longobardic castle of which it is visible the wall curtain, a succession of spiral alleys realized with ancient stone and historical palaces (Mazzeo and Amato Palace).

Among the worship places near the castle, we find the Church of Saint Leo, dedicated to the patron saint of the village, of the XVIII century with a fine stone portal; beside, the nineteenth-century Church of the Holy Immaculate; in the highest point of the residential area, among narrow and curvy little streets, it rises up the Mother Church of Saint Martin, with the characteristic dome and the bell tower. From the landscape of the Fortress, you can enjoy one of the most beautiful landscapes of Irpinia.

In the summer, not to be missed the event Cairano7X, born from an idea of Franco Dragone from Cairano, one of the biggest show makers of the world, creator of the Cirque du Soleil. The festival is organized in more days and several sections: Community Vegetable Garden, ‘Blooming Village’, ‘Recover/Relive’, ‘Theatrical Short Films Festival’, ‘Widespread Welcome’ among the others, capable to put in contact people and landscapes in that magical and surreal corner of Irpinia.

‘In the middle of the valley an only mount rises, which offers its steep slope to all the others. Among all, it stays up there, praised on the cliff. In the dark, it is the closer light to the heaven. Up there, like a polar star, here it is, orienting, the village of the Coppoloni (deriving from cap)… Everybody sees it but nobody goes there… They believe to the tales and invent them. They cultivate the Senses of the intellect in the cliff, in the shape of bluebottles, then bring them and sell them in boxes’. In this way, Vinicio Capossela describes these places in his novel, Il paese dei coppoloni, finalist of the Strega Prize 2015.