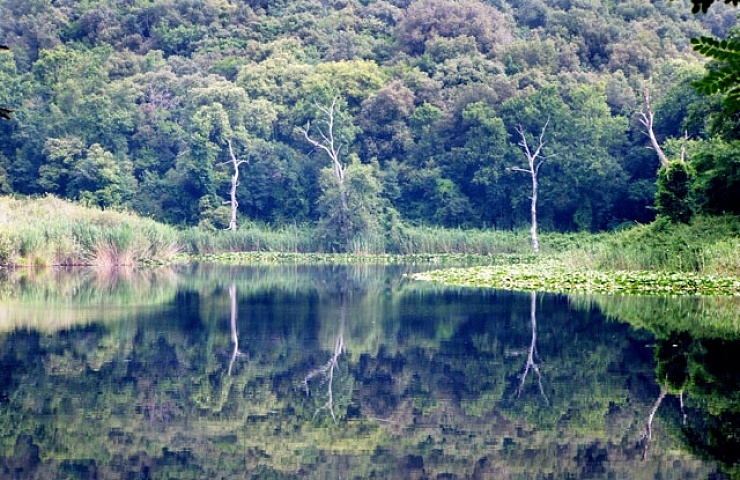 The Astroni Crater is an extinct volcano that is part of the volcanic area of the Phlegraean Fields. The reserve is inside the circuit of the WWF special protection.

The bottom of the Astroni Crater presents some elevations among which the Colle dell’Imperatore (Emperor’s Hill) and the Colle della Rotondella (Rotondella’s Hill), formed because of the eruptive activity.

In the lowest point of the crater, there are three little lakes, Lago Grande, Cofaniello Piccolo and Cofaniello Grande, with typical vegetation of the lake areas (reeds, bulrushes and willows).

The natural reserve offers the visitor a vast number of paths. Each of them has a peculiarity (botanical, zoological, geological) but it is combined and completed by other aspects.

The Astroni crater originated about 3,700 years ago and is part of a system of volcanic structures, developed at west of the city of Naples.

About the meaning of the word Astroni, there are several hypothesis.

One of these makes derive the origin of the name from the word Sturnis, for the copious presence of storms of Herons on the area. Instead, somebody believes that it comes from Sterope, a Cyclops that, according to the mythology, lived in this area.

According to another hypothesis, Astroni rises from the word Strioni or stregoni (wizards) who, according to some popular beliefs of that time, made in the crater their magical rites. Ancient documents that tell the historical path of the Astroni talk about their use as thermal baths, where in 1217 Frederick II went to take care of an illness. In the second half of the XV century, the Astroni crater was transformed into Royal hunting reserve by Alfonso I of Aragon, who populated the crater with animal species of hunting interest like boars, deers, roe deers and birds.

Starting from the half of 1800, the current reserve entered the area of gravitation of the city of Naples and its function started to change radically. From 1919 to 1970, in fact, entrusted its management to the Opera Nazionale Combattenti, the area underwent a strong agricultural exploitation, while during the Second World War it was used as arms storage.

Therefore, in 1992, the Oasis was officially opened to the public.

The access to the Reserve is through the ancient ‘bourbon path’, long 360m and with around 160 steps, which descends to the bottom of the crater, in the heart of the wood, with a gap of about 80 meters. From here, it starts the ‘hunting wide road’, an elliptic path of about 3 km that runs on the bottom of the crater and from which all the walkable paths leave.