‘Luci d’Artista’, inside the bright enchantment of Salerno The tenth edition of Luci d’Artista (Artist’s Lights) has been inaugurated, the event that every year attracts in the city of Campania, from every part of Italy and from abroad, hundreds of thousands of tourists.

Luci d’Artista is a show of lights, installed from November until January in Salerno in the streets, in the squares and in the gardens. The visitor is taken in an enchanting scenery: Enchanted Gardens, the most beloved fairy tales, the planetary constellations and the celestial phenomena, the Orient suggestion, the circus elements, the sails on the sea. 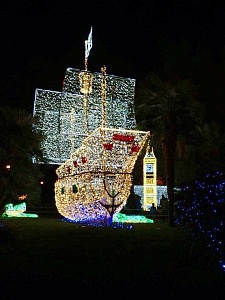 The Artist’s Lights were placed for the first time in Salerno in 2006, immediately creating astonishment and curiosity among the citizens. During the years, there has been also some twinning between the two cities that have brought to the exchange of artworks in the periods of the year where these are shown, contributing in this way to often vary the lights keeping high the curiosity of their visitors.

The event, which has very important positive consequences for the economic activities of commerce, tourism and entertainment, has thus a metaphorical meaning full of hope and joy: it brightens up the soul and helps to look at the future with confidence.