The Town of Salerno 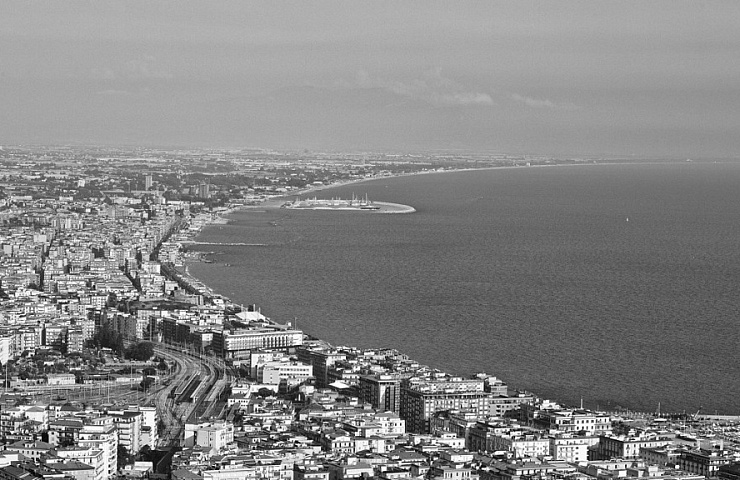 The history of Salerno, during the contemporary age, summarizes the main features of the transformation and modernization of Southern Italy (Mezzogiorno). The city and its province have been an important place to test political, cultural and social factors that have characterized its development until today. At the beginning of the contemporary age, after the great Atlantic revolutions, also Salerno was involved in the political and cultural debates of the Age of Enlightenment. Some of the main Neapolitan Enlightenment thinkers came from its social environment. During the frantic days of the revolution and the civil war of 1799, Salerno – as almost the whole province – was the scene of bloody conflicts between republicans and realists, French and English. During the French decade, after abolishing feudalism and overtaking the ancient regime structures and its legacy of the past (such as the Schola Medica Salernitana), the city became the institutional center of a vast province, whose political features and geographical boundaries have been preserved until today.

In the first half of the 19th century, gradually Salerno retook a role lost during the Modern age thanks to its proximity to the capital Naples, the development of the first industrial segments of the kingdom in its district and the demographic size of the province. The politicization of important areas of the society combined these elements with an ideological struggle, which experienced difficult and intense, often dramatic and bloody stages. In the constitutional revolution of 1820, Salerno was the main center of the liberal mobilization. In the decades of the absolutism, it recorded a complex and alternating political struggle between the defenders of the Bourbon regime and the supporters of the liberalism, whose main lines continued in the revolution of 1848 and until the fall of the Bourbon regime. In 1857, for example, it hosted one of the first big trials of the century, followed by the international press, held to the survivors of Carlo Pisacane’s expedition, defeated in Vallo di Diano by the Bourbon security forces. For these reasons, Salerno was chosen as a strategic target of Garibaldi’s march in 1860 and became one of the symbolic places of the national unitary revolution in the old Kingdom of the Two Sicilies. The capital and the several towns of the province, where there was an important national liberal elite, were among the first to vote for the acceptance of the nascent Italian nation.

Salerno changed during the Liberal age (1861-1922). Firstly, because it became one of the most important railway and commercial hub of Southern Italy. Secondly, because it was one of the strongholds of the Historic Left and consequently one of the most active centers of southern politics until the Giolittian era. The testimonies of that period are visible in the urban transformation, which definitely expanded the town circle outside the ancient city walls and changed many spaces in the place names and in the physical representations, such as the statues of the City Park and the Verdi Theatre, which celebrated the final integration in the new Italian nation. The massive participation of the population of the province to the Great War contributed to change the social and economic context that accompanied the crisis of the liberal state. Salerno lived episodes of struggle as consequence of the contrast between fascists and antifascists, until the final replacement of the liberal administration, linked to Giovanni Amendola, with a city government under Mussolini’s regime. Fascism in Salerno continued the expansion of the city during its twenty years of dictatorship, celebrating its victory with the buildings that still mark important aspects of the local identity (the Town Hall and the Prefecture). During the years of the regime, a significant transformation of the relationship between the city and the surrounding areas began: first of all, the Sele plain and the region of the Agro Nocerino Sarnese, where new businesses, related to tobacco, construction and mechanics, started to form a different economic and social profile of Salerno.

In 1943, Salerno became the crossroads of the crisis of fascism and of the old Italian state, and one of the hot areas of the borders of Nazi Europe. The first great Allied invasion on the continent and the harsh battle between the Anglo-Americans and Hitler’s army took place in the plain. A few months later, the Italian Government, reformed after the collapse of the armistice, moved to Salerno, where the executive branch tried to rebuild the legitimacy and the institutional continuity of the state, while old and new parties started a path that led to the founding of the Republic (Svolta di Salerno, 1944) a few years later. In the city, this transition process will end only in the Fifties, with the disappearance of the monarchists and the final affirmation of mass parties. In the first part of the history of the Republic, between the Fifties and the Seventies, the city recorded the biggest transformation in its history. The progressive marginalization of the rural and agricultural context, with the simultaneous acceleration of urbanization and the economic growth, intensified during the years of the Miracle, radically changed the aspect of Salerno. The population growth, the creation of important infrastructures such as the port, and the location of public and private enterprises in the newly created industrial zone defined the main lines of the current urban structure. In addition, the presence of the big republican political forces contributed to insert the province, often successfully, in the new season of the Italian history, marked by the absolute leadership of the parties and the labor unions, firstly the Christian Democracy and secondly the Socialist and Communist Left.

At the end of the Seventies, the city began a different phase, lasting until today but similar to that of other Italian and European cities, marked by the progressive secularization and mobilization of the society, the resulting disappearance of the last traditions linked to the rural society and the spread of modern cultural patterns and high levels of education. The growth of the University, until its transformation into a great athenaeum, in the Nineties, was one of the most evident steps, even symbolic, of this historical season. The crisis of the parties between 1992 and 1994 marked the end of the great mass parties and the formation of models based on a highlighted personalization of the politics and of the decision processes. At the same time, the city changed its social and economic characterization. Large companies disappeared, substituted for small and medium-sized enterprises, mainly distributed in the adjacent areas or on the Apennines. The development of the metropolitan area brought to the city commercial growth and the building expansion lived vacillating moments. Included the tourism has had a great development in the latest years thanks to the growing number of travelers to the Cilento and Amalfi coasts and the success in the recovery of physical and architectural spaces of the old town center.

Between the Sixties and Seventies of the last century, Salerno lived a culturally vibrant season. It was marked by the presence of important scholars and intellectuals linked to the new University, where Edoardo Sanguineti and Tullio De Mauro, Filiberto Menna and Gioacchino Lanza Tomasi, Achille Mango and Mario Perniola met. However, it was also characterized by a widespread fervor expressed by the creation of art galleries, libraries and cultural clubs and by the organization of important film and theatre festivals, exhibitions and important conventions in an enthusiastic and engaging mood. Here, just some examples of the events that marked an essential phase of the cultural growth of Salerno, which has collected only a part of the very rich legacy of these years. The exhibition promoted by Marcello Rumma, collector and special publisher, one of the architects of the international affirmation of the Arte Povera. The three unforgotten editions of the New Trends Theatre Festival, which, led by Filiberto Menna and Giuseppe Bartolocci, proposed in Salerno the best of the theatre avant-garde. The activity of the galleries, with the one of Il Catalogo standing out, a still active space founded in 1968 thanks to the poet Alfonso Gatto. Finally, in the second half of the Seventies, the creation of the Teatro Gruppo where folk traditions, music, theater and also photograph experiences grew up.

In the last decades of the 20th century, some experiences were institutionalized. In 1989, thanks to his family, the Filiberto Menna Foundation was created. The Contemporary Art Study Centre, which opened for the city the library of the historian and art critic of Salerno, still promotes, on the basis of the analytical lesson of the scholar, the reflection on the language and the theory of the arts through meetings, conferences, artist’s dialogues, workshops and research exhibitions. Later, the Alfonso Gatto Foundation was established and, after various happenings, now it works more firmly on the promotion of the literary and artistic production of the poet. The Contemporary Salerno Foundation is much younger and particularly aimed at the proposal of theatre experiences and researches. In the Nineties, Linea D’Ombra-Young Culture Festival was born, a showcase for the languages and the creativity of the new generations, paying attention to the cinema, the video art, the performance, the graphics and the music, which has an important tradition in Salerno, especially for the jazz.

Together with the exhibitions promoted by Menna Foundation, the art galleries – including that of Paola Verrengia, characterized by continuity – and by some associations, in the first years of the new century, local governments supported, with events, the contemporary art in Salerno. In the spaces found inside the Monumental Complex of Saint Sophie, the town council proposed exhibitions of great acclaim that presented also works by Picasso, Mirò, Warhol and projects by Pier Luigi Nervi. On the other hand, St. Augustine Palace, seat of the Province, hosted mainly linked to the territory artists, who now are also in the spaces of the Provincial Art Gallery. Between 2011 and 2012, the Superintendence BSAE of Salerno and Avellino promoted the Door-to-door exhibition, site-specific interventions of contemporary art in the Old Town Center of Salerno, where you can still see some of those works. Then, the Fontana Felice (Happy Fountain) by Ugo Marano, made up of blue ceramic, in Corso Garibaldi and the Fountain of the Dolphins by Riccardo Dalisi in Piazza Flavio Gioia enriched the architectural heritage of the city. For some years now, the city center has been hosting during the winter months the ephemeral bright architectures that draws the colored path of Luci d’artista (Artist’s Lights), an event that always gets a wide success.

The attention to literature shows itself with the activity of the House of Poetry started in 1996, which over the years has brought to Salerno some of the protagonists of the international poetry, and, more recently, also with the Salerno Literature Festival. Thanks to the decisive contribution of the University, for a few days it occupies the city, its streets and squares, with the words and voices of contemporary literature.

In the latest decades, the interest in the architecture has grown considerably, thanks to the urban policy of the City. Salerno, whose urban landscape is also marked by some interesting architectures of the early 20th century, welcomes today a number of projects, mostly still under construction, signed by some of the great contemporary starchitects. Among these, for example, the Cittadella Giudiziaria (the Courthouse) designed by David Chipperfield, the Marine Station by Zaha Hadid and the less central Sports Center by Tobia Scarpa in the eastern area. These building sites, together with the discussed monumental Crescent, by the Catalan architect Ricardo Bofill, give the image of a city in continuous transformation.