The Schola Medica Salernitana in the tales 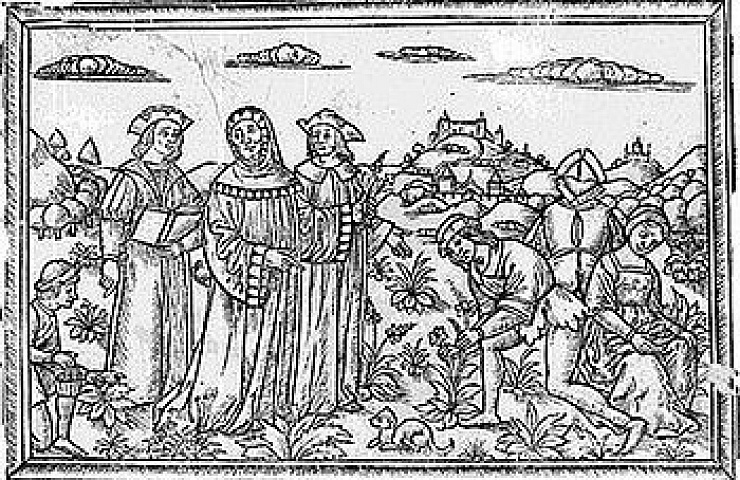 Many legends in Salerno arise from the presence of the Schola Medica Salernitana, the most ancient medical institution of the world born in Salerno during the Middle Ages.

One of these, spread all over Europe and taken as inspiration by many tales writers, is entitled Poor Henry.

The protagonist of this story is Henry, a young German prince, very beloved by his people. Unfortunately, Henry was infected by leprosy that horrendously disfigured him so that people begun to call him poor Henry. Nevertheless, in a dream the devil appeared him disguised as travelling doctor who advised him, to recover, to take a bath in a virgin’s blood who offered spontaneously for this macabre ritual. The beautiful Elsie, the daughter of a rich noble, wanted to sacrifice her own life because she was secretly in love with the unlucky prince. Nevertheless, Henry did not want in any way that the beautiful Elsie made this extreme action and decided to go to Salerno, along with the young girl, to ask a consultation to the master of the Schola Medica Salernitana.

However, arrived in Salerno, the prince could not immediately ask for the consultation to the masters because there was the sumptuous ceremony of oath of the new graduates, in the Church of San Pietro a Corte, to which all the masters of the Schola took place. So, Henry, waiting for the medical consultation, decided to go to the tomb of the Evangelist Matthew to pray. Miraculously, while the prince was still praying, the Saint gave him the grace and treated him for the leprosy leaving neither a sign of the terrible illness. Enthusiast for the healing, Henry married the beautiful Elsie, magnificently celebrating in the entire town.

The other tale is about Robert of Normandy and Sybilla from Conversano.

During the crusades, Robert was hit by a poisoned arrow and, going back to England, given that his conditions worsened more and more, stopped in Salerno. Here, the doctors expressed their verdict: the only way to save his life was sipping him the venom from the wound, but if someone had made it, they would have died immediately. Robert refused all the volunteers, but during the night, his wife, Sybilla from Conversano, sipped him the venom.

This tale is illustrated in a miniature of the Canon of Avicenna, where you see Robert who, at the doors of the town, thanks and greets the doctors.

In the image above, famous doctors and personalities of the Schola