The Archaeological Park of Ancient Cuma 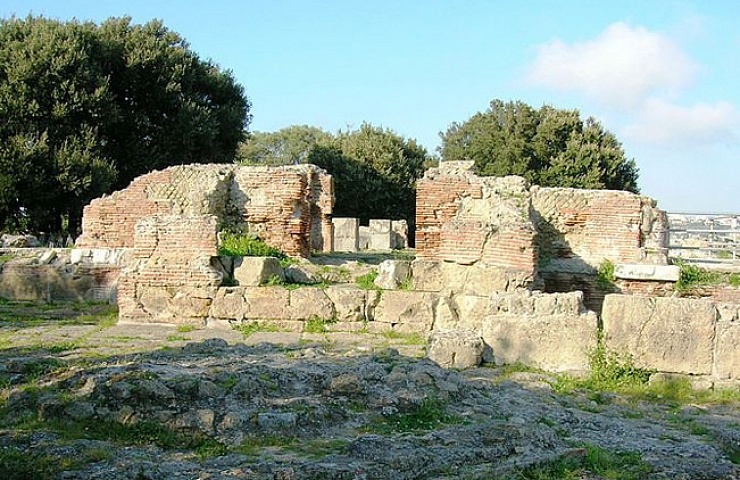 Of ancient Cuma, the acropolis and the low town are visible today. The Greeks placed the acropolis of their town on two terraces and on a lower southern spur of the Mount of Cuma. This site, for conformity and position, was a key point accessible only from the southern side. Therefore, it resulted an integration to the natural defenses with fortification walls, of which still today we have conspicuous remains.

The Archaeological Park of Cuma is organized into itineraries of visit. They are structured and equipped with information and didactic supports.

The main visible evidences inside the Park are the temples of Jupiter and of Apollo and the Cave of the Sybil.

The Temple of Jupiter is the main sanctuary of the Acropolis. The remains were brought to light between 1924 and 1932. For long time, it has been attributed to Jupiter. Nevertheless, it seems more likely that it was consecrated to Demeter, ancient patron divinity of the people of Cuma. The temple was probably built in the XI century B.C. During the Byzantine age, it was transformed into Basilica dedicated to San Massimo. With the Christian worship, the Temple underwent continuous modifications. The cell, with the addition of an altar, became a baptismal font.

The Temple of Apollo probably already existed from the VI century, but its consecration to Apollo results only in Roman age. The found material makes think to an original belonging of the sanctuary to Hera. Of the most ancient phase of the sanctuary, it remains little. Some structures, emerged from the land or hidden in the vegetation, belong to this era. The central part of the temple was occupied by the cell, divided into three parts by two lines of quadrangular columns. Even this sanctuary, around the V century A.D., was transformed into Christian basilica.

The Cave of the Sybil is a rectilinear gallery with trapezoidal section. The Cave was discovered in 1932. Its discoverer, Maiuri, recognized in it the place where the Sybil, that is, the priestess of the god Apollo, received the believers to predict their future. The gallery for a long time had remained secret because walled-in with an oven, and the entire path was full of soil. In the Middle Ages, the interest for the figure of the Sybil brought to identify the oracle starting from the work of Virgil, the Aeneid. Therefore, it was considered seat, the ‘Cave of the Sybil’ on the lake Avernus. The identification was universally accepted during the entire Renaissance. The same Petrarch, Boccaccio and antique dealers and travelers believed in this wrong seat of the oracle. 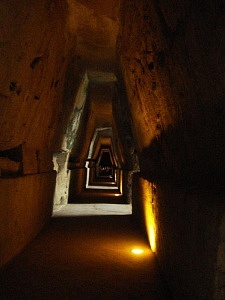 ‘I saw the land and the house of the Sybil, and that terrible wastefulness from where the fools do not come back and where the wise people do not try to penetrate’. Petrarch, 1343.