Scampìa between Carnival and Creativity 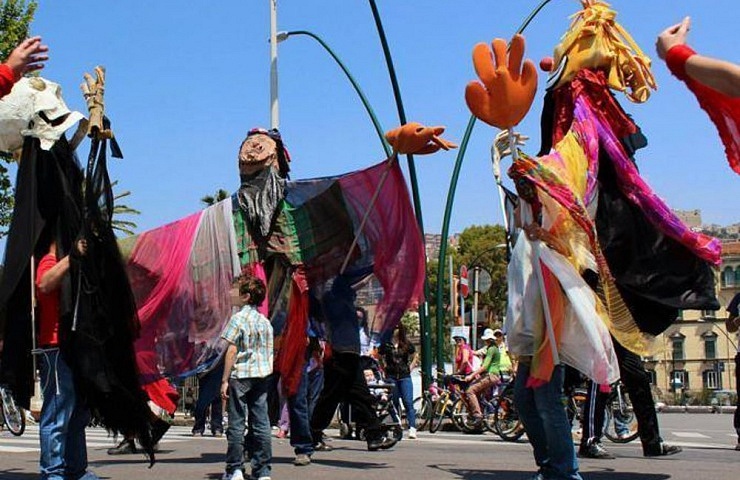 Scampìa, district of the north suburbs of Naples, is surely a place of an unusual itinerary!

Nevertheless, Scampìa is a territory where creativity is expressed in thousands of forms, combined with the noble aim of making its own capabilities available for everybody.

In this way, it rises Gridas, group The awakening of the sleep, referring to the sentence of one of the etchings of the ‘villa of the deaf’ of Francisco Goya: ‘the sleep of the reason produces monsters’.

Gridas is a non-profit cultural association founded in 1981 by Felice Pignataro, Mirella La Magno, Franco Vicario and other people joined by the common aim of putting their own artistic and cultural abilities to the service of common people to stimulate the awakening of the consciences and an active participation in the growth of the society.

Gridas promotes since 1983 the Carnival of district in Scampìa, with the purpose of revaluating the function of the carnival as occasion of social complaint and criticism through the use of masks; as well as, the aim to create a tradition in a quarter without history as the Neapolitan suburb is.

The Carnival of Scampìa assumes in this way deep meanings that examine the contradictions of the reality. An approach to reality through the laughter, a carnival as overturning of values. So, during the years, different topics have followed one another: sense and nonsense, old and new world, anguish and utopia, continent and contained (…)

The Gridas Carnival is based on a strong scholastic involvement. In fact, it is an occasion of recovery of the manual skills, so at school they do not go only with the head but also with the hands. Moreover, they try to keep at least a popular tradition that is also contribution to the identity of the district. It is to exercise the creativity applied to the daily cases of life, to use masks as social criticism. It is to establish a relation between school and territory, showing in procession in the streets, as a theater, what has been produced at school. Moreover, it is a didactic recycling of scrap and waste materials.

The Gridas Carnival in Scampìa is an overturning of the collective imaginary. The perception of a territory that in the common image is monochromatic, transforms itself, enriching with the colors of solidarity and peace.

Therefore, every year, a topic is chosen about current facts, on which reasoning to create the masks and the structures that parade then in the streets of the district. The masks are generally counterposed between positive and negative symbols related to the chosen topic. The parade ends with a bonfire to burn, allegorically, the negative symbols and make triumph the positive ones that dance around the ashes.