Salerno in the Decameron 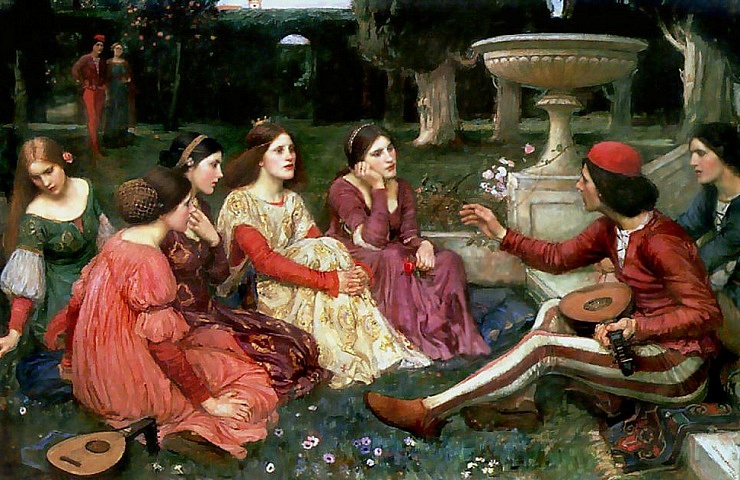 Maybe not everyone knows that, in the Decameron by Boccaccio, three of the one hundred novellas have as protagonists people from Salerno: a merchant from Ravello, a prince of Salerno and his daughter and a master of the Schola Medica Salernitana.

The first of these is told in the second day by Lauretta and has as protagonist a rich merchant of Ravello whose name is Landolfo Rufolo.

The story follows the vicissitudes of the merchant of Ravello who, unsatisfied of his wealth, wanted to travel until Cyprus to sell his merchandise. Nevertheless, arrived on the island, he suffered a strong competition and was forced to sell his own goods underpriced and, to save the made investment, even his ship. Bought a new smaller ship, Landolfo dedicated himself to the piracy but until when he was captured by the Genoese navy that

imprisoned him. The ship on which he was imprisoned sank because of a strong storm and the merchant of Ravello survived grabbing on a box. Rescued by a woman on the shore of Corfu, the man discovered that the box that saved him contained innumerable precious stones with whom generously rewarded the woman, payed the trip until the native Ravello and lived the rest of his life without trading anymore.

Both the second and the third story are told on the fourth day.

The first of the two, told by Fiammetta, has as protagonist Tancredi from Salerno and his daughter Ghismunda and the theme is the unhappy Love. The third story, told by Dioneo, instead, is about the doctor Mazzeo della Montagna. The protagonist of the story is a great doctor of the Schola Medica Salernitana who, absorbed by his job and his responsibilities, already old, married a young girl from Salerno.