Ravello, town of music and of the prestigious Villa Cimbrone and Villa Rufolo 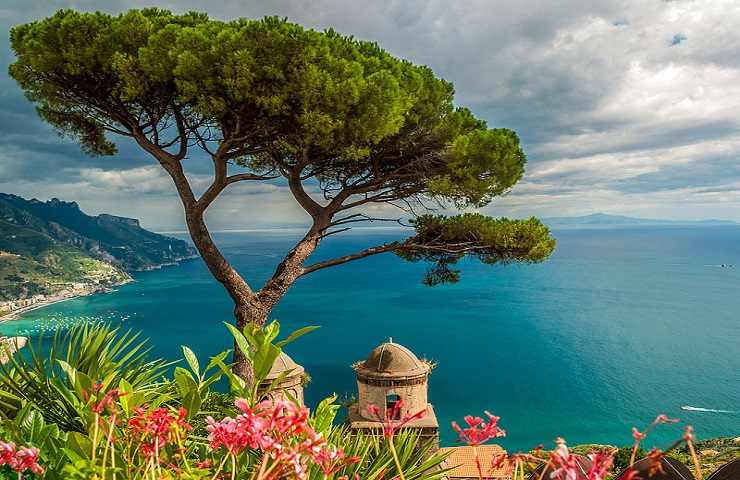 In province of Salerno, in the heart of the Amalfi Coast, Ravello rises. Famous and panoramic tourist center, discovered and frequented by numerous personalities, Ravello is well known for the charm of its architectures and its famous villas.

Founded in the V century as refuge place from the incursions of the barbarians that marked the fall of the Western Roman Empire, then Ravello was reached by the patricians of Amalfi after a fight among more factions of the aristocracy of Amalfi that almost arrived to the civil war.

The town is also characterized by the presence of numerous monuments and places of cultural interest, such as, for example, the Cathedral of Ravello. This architecture dates back to the XI century and is really important because, in the seventeenth-century chapel, it is conserved the ampule with the blood of the Patron Saint Pantaleone, which presents the annual phenomenon of the liquefaction.

Many are also the magnificent churches present in Ravello that create an inestimable cultural heritage: from the Church of St. Francis, of gothic style, to the Baroque Church of St. Mary of the Lacco.

Also the palaces of Ravello are really interesting: among these, one of the most famous is surely Rogadeo Palace, in Piazza Fontana, one of the most ancient of Ravello, become Augustinian monastery from the XI to the XIX century and today seat of the Bonadies Hotel.

Among the many beauties of Ravello, the famous Villa Cimbrone and Villa Rufolo stand out. The first is an historical building on a rocky promontory on the Amalfi Coast and mainly occupied by a vast park decorated with statues, various antiquities, fountains and caves and culminating into a panoramic viewpoint that, from the famous Terrace of the Infinite, shows all the beauty of the Coast. Once residence first of the noble family Acconciagioco and then of the Fusco and of the Amici, in 1904 the entire property was acquired by a noble British banker, Ernest William Beckett, who radically transformed the villa and its gardens, giving them their current aspect.

Instead, Villa Rufolo is an historical building that looks out in front of the Cathedral in the square of the episcopate and its initial plant dates back to the XIII century, with vast nineteenth-century works. Belonging at the beginning to the powerful and rich family of the Rufolo that excelled in the trade, passed then for succession to other owners such as the Confalone, the Muscettola and the d’Afflitto until when, at the middle of the Nineteenth century, was sold to the Scottish Francis Neville Reid who made a general restoration, giving it the current setting.

The cathedral of Ravello, one of the symbols of the town.