The Neapolitan legend of the islet of Megaride 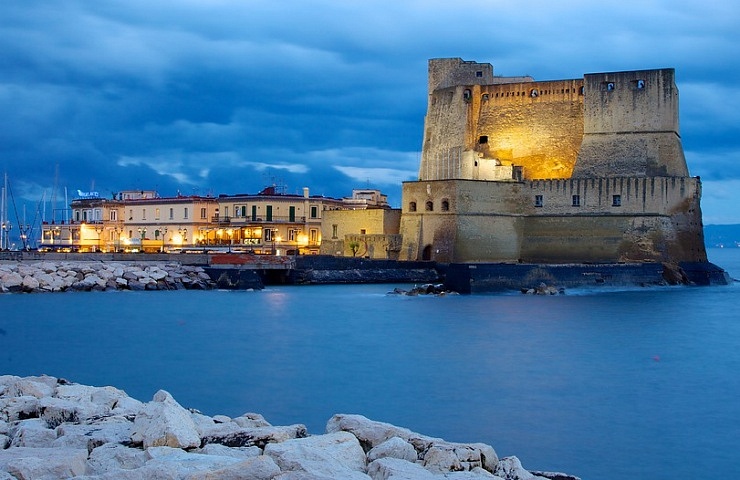 Megaride is a minor island of the Gulf of Naples on which Castel dell’Ovo rises. Originally, it was separated from the dry land by a short sea strait, but today it is all one with it.

The ancient myth of the islet of Megaride evokes how, in the Nineteenth century, it was the most stormy place of the sea of Chiatamone, the zone of Naples between the sea and the rocky part of the mount Echia. The island is recovered by a blooming surface of orange trees, rushes and very short shrubs typical of the Mediterranean scrub. Megaride was, originally, bed of the Nereids and of the Dryads, the mythological figures of the marine and vegetal nymphs.

Nevertheless, according to the legend, Lucius Licinius Lucullus, a strong warrior of the Roman imperial era, subverted the tranquility and the sacredness of that land. Here Lucullus built Castrum Lucullanum (so-called until the late Roman era), the Villa-fortress of Megaride.

This villa hosted one of the richest and selected private libraries of the ancient times, breeding of moray eels, orchards of cherries coming from Persia and Cerasunta, towns of Anatolia (current Turkey), from which the Neapolitan name of the fruit, ‘cerasa’, comes from. Lucullus violated the house of the Oceanid nymphs and personally drew meadows, groves of roses and steps that descended to the sea.

The dwelling was at that point his: thrown out the gods and their court, Lucullus put his beautiful slaves in gardens worthy of an emperor, moray eels in the nurseries of the caves of corals and green seaweeds, the rarest and exotic winged animals in the aviaries, the most cultured and refined musicians in the rounded arches.

The Villa of Megaride was known for its parties and bacchanalia, for the magic lights, for its tasty banquets, for the majestic theatrical sceneries; but, even more, for the elite beauty it hosted: Servilia, his beautiful wife, Cato’s sister. Her great beauty made desperate poets and artists, all the guests of the patron, from the boys to the Roman nobles and even the gods.

‘And Servilia laid down on the little bed, dressed of golden cloth, allowing her slaves to wave her, trembling of pleasure for the sea breeze, looking distractedly at the jumble of the dancers, murmuring to herself, I am, I am the siren! And the air murmurs as well, after having joking with the scented hair: she is, she is the siren.

– More beautiful than Venus – Servilia says with her Olympian pride. This is heard by the attentive Oceanid nymphs and Venus knows that Servilia has offended her and this time Poseidon listens to the prayer of his beautiful lover’, condemning the islet of Megaride to the erosion and future disappearance.