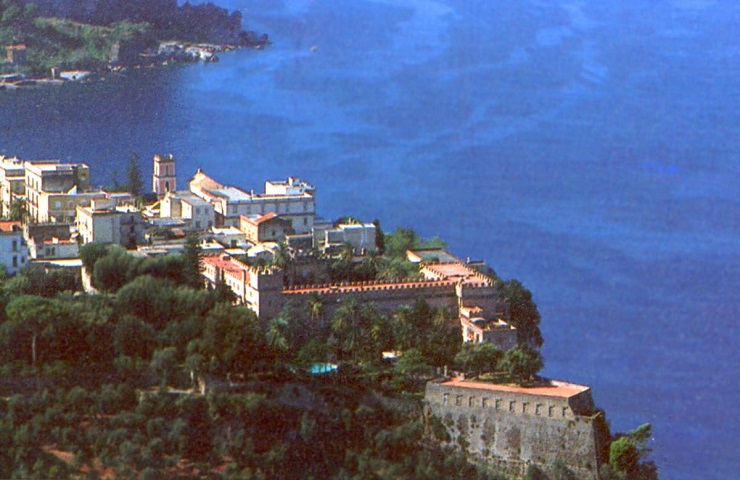 There are places with a perfect position, nestled between the sea and the mountain: Vico Equense is one of these.

Placed in the middle between the Gulf of Naples and the Lattari Mountains, Vico Equense is one of the pearls of the so-called Sorrentine Coast.

Geographically, it has a special position from the tourist point of view, but particular from the territorial point of view. In fact, it rises up on a tuff and limestone block at only 90 m above sea level and finds its highest point on Mount Sant’Angelo.

Vico Equense is also one of the biggest municipalities of the Sorrentine peninsula as well as one of the most ancient and has seen the passage of the Aragonese and Angevin people during its long life.

Its social expansion had an important growth in 1906 thanks to the tramline that connected Castellammare di Stabia and Sorrento, then substituted in 1984 by the railway that linked Torre Annunziata to Sorrento and Naples.

Numerous are the places of interest of the splendid Vico Equense, such as the famous Giusso Castle.

Built between 1284 and 1289, it is told that Giusso Castle was realized on the will of king Charles II of Anjou, even if some sources give as more probable a realization for will of the feudal lord Sparano of Bari. Used both as military structure and for residential use, Giusso Castle takes its name from its owners Luigi and his son Girolamo Giusso who, during the XIX century made numerous restoration and improvement works. Actually, during the years, it belonged to several personalities: first to Gabriele Curiale, page of the crown of Aragon, then to Ferrante Carafa, feudal lord of the village in 1568, and later to Matteo Di Capua, member of the family of the Ravaschieri.

After a short period in the hands of Nicola Amalfi, it became property of the family Giusso that in 1934 left it to the Society of Jesus.

During the time, Giusso Castle has changed a lot and now, of the original construction, only a part of the town wall and a terrace on the sea remain.

The main changes were made in the XVII century and transformed the castle into a noble residence with gardens, caves, water features and centuries-old plants. Instead, the interiors were embellished and made suitable to host the art collection, then lost, by Matteo Di Capua.

Luigi Giusso and his son Girolamo, from whom the Castle took its name, considerably restored the building. They decided the characteristic pink salmon color and to fresco the room of the Arms and that of the Fans, but also to build the little private chapel dedicated to Santa Maria della Stella.

Nevertheless, the beauty of Giusso Castle, in spite of the numerous changes experienced in the time, has luckily arrived until us so that today the structure is used to host ceremonies, meetings and art expositions.

A view of Giusso Castle in Vico Equense.