The Maschio Angioino and the legend of the crocodile 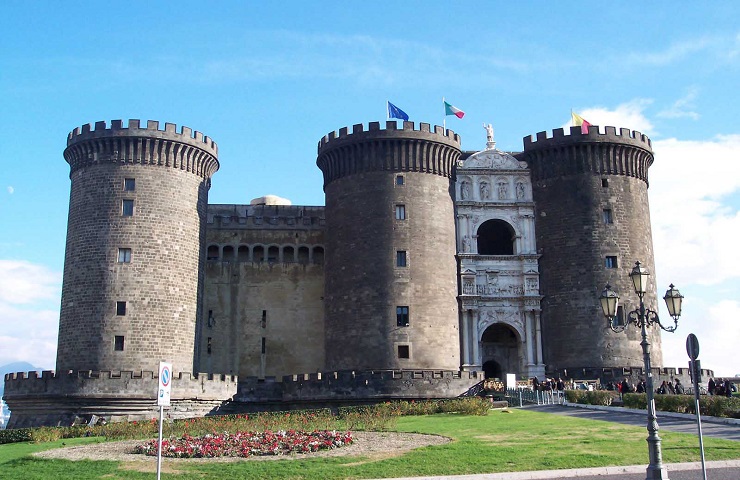 Naples, as everybody knows, is a fascinating city rich in monuments and places of cultural, historical and artistic interest.

A place where history and legend often intertwine, loading even more some places of a veil of mystery and curiosity.

One of the monuments symbol of the city of Naples is undoubtedly the Maschio Angioino.

The Maschio Angioino – or Castel Nuovo – is one of the most ancient Castles of the city, of medieval and renaissance character, as well as, currently, seat of the Neapolitan Society of country’s history and the Committee of Naples of the Institute for the history of the Italian Risorgimento.

The Maschio Angioino, which dominates the wonderful Piazza del Municipio, is also the seat of the civic museum, therefore a place with a high cultural interest.

It takes its name from Charles I of Anjou who made it build in 1266 when, defeated the Swabians, ascended to the throne of Sicily and moved its capital from Palermo to Naples.

The Castle has a complex structure, part of which was rebuilt, after several dominations, by Alfonso of Aragon. Today, they remain only the palatine chapel, some towers and the walls, but the Castle had originally a trapezoidal plant, five big protection towers, a moat that surrounded it, a Catalan staircase inside each tower and, between the two towers that protected the entrance (also called towers ‘Di Mezzo’ and ‘di Guardia’), a marble triumph arch.

In particular, among the most important elements that are arrived until us, there is the ‘Palatine Chapel’, also called church of ‘San Sebastiano’ or of ‘Santa Barbara’, characterized by a gothic architecture and inside magnificently frescoed with artworks by Masi di Bianco and even Giotto.

Moreover, the Maschio Angioino is known also for some stories such as the legend of the crocodile, one of the most famous Neapolitan legends.

As everybody knows, the Castle has some prisons in its basements. Among these, the ‘prison of the conspiracy of the barons’ and the ‘moat of the mile’ that initially was used as wheat warehouse. Here, the prisoners were locked up, among which also the famous philosopher Tommaso Campanella, and from then the moat of the mile took the name of ‘moat of the crocodile’. In fact, Benedetto Croce, in the text ‘Neapolitan stories and legends’, talks about this legend and writes:

‘In that castle, there was a moat under the level of the sea, dark, humid, where the prisoners, who they want to more strictly castigate, were usually put. When, all of a sudden, they started to notice with astonishment that, from there, the prisoners disappeared. Did they escape? How? Put a tighter surveillance and a new guest inside there, one day they saw, unexpected and terrifying scene, from a hole hidden in the moat, a monster, a crocodile entering and, with its jaws, it grasped for the legs the prisoner, and dragged him to the sea to eat him’.

According to the legend, this crocodile was brought to Naples from Egypt and, in particular, by the Queen Joanna II who married James of Bourbon. It seems that she made eat her lovers to the crocodile so that her husband could not discover them.

Instead, another version of the legend wants that the crocodile was brought by Ferrante of Aragon, king of Naples from 1458 to 1494, who made it eat numerous Barons protagonists of the conspiracy against him. Then, he got rid of the animal to cancel all the tracks of the crime giving it a leg of horse that made it suffocate.