Amalfi: a walk between the famous Cathedral and the Cloister of Paradise 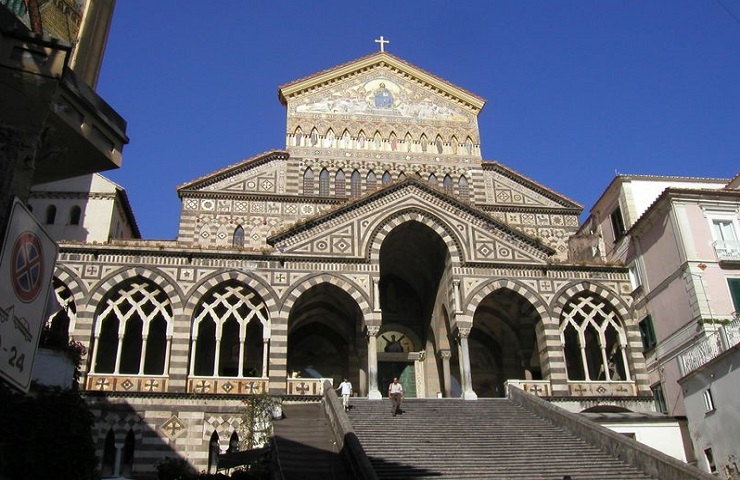 The wonderful Amalfi, pearl of the Amalfi Coast and known all around the world for its breathtaking landscapes, hides also numerous architectural beauties of undeniable interest.

Famous in Amalfi also the fountains, like the Fountain of Sant’Andrea, with the marble sculptures of the patron saint and the sea deities, sculpted in the Eighteenth century, and the Fountain of Cap ‘e Ciuccio, where once the donkeys coming from the Valley of the Mills drank.

Many are the holy monuments of the wonderful town in province of Salerno, but among all, the most famous seems to be the Cathedral of Amalfi with the Cloister of Paradise.

The Cathedral, realized in a wonderful Arabian-Sicilian style, is now dedicated to Saint Andrew, patron of the town.

Actually, the building, more than a single construction, would have to be considered as a monumental complex, as it is made of overlaps and juxtapositions of several churches built in different centuries. The first building dedicated to the Christian worship was for example an Early Christian church dating back to the VI century AD, which substituted a temple dedicated to Roman deities.

Between the VI and the IX century AD, instead, the first Cathedral dedicated to Madonna Assunta, first patron saint of Amalfi, was built. Instead, the current Church, as already said, is dedicated to Saint Andrew and dates back to the IX century AD, built on commission of the Duke Mansone I. Later, some additions were made both in Middle Ages and in Baroque age, such as the Bell Tower, the altar of Saint Andrew with two statues by Bernini and the Cloister of Paradise.

The Cloister of Paradise has become during the time another symbol of Amalfi and one of the most known and interesting buildings of the entire Amalfi Coast.

Built between 1266 and 1268, wanted by the archbishop Filippo Augustariccio, the Cloister of Paradise was a cemetery for the illustrious and meritorious citizens. Attached to the Basilica of the Assunta, it was joined to the archbishop’s palace and made of a four-sided portico with cross vaults, pointed arches, twin columns and woven arches of Moorish influence.

Inside the Cloister of Paradise, there were six frescoed chapels realized between the end of the XIII and the beginning of the XIV century. They belonged to noble families of Amalfi and hosted the sarcophaguses with the bodies of their illustrious representatives. Of these sarcophaguses, only five remain, but very important from the historical point of view.

They are: a sarcophagus representing the Rape of Proserpina, famous episode of the Greek mythology. One representing Romulus and Remus suckled by the she-wolf. The sarcophagus representing the Marriage of Peleus and Thetis. The roman one with ‘S’ grooves, with the coat of arms of the Favaro family of Amalfi and with the cross of Amalfi. The sarcophagus of the archbishop Pietro Capuano, died in 1359, with the sculpted images of the Virgin Mary, Christ, the Twelve Apostles and the saints bishops Blaise and Basil. Finally, the roman sarcophagus of the IV century AD that has the name of the Decurion Publio Ottavio Rufo.

At the center of the Cloister of Paradise, there is a wonderful garden with palm trees, probably built only after the restoration in 1908.

A view of the inner garden of the Cloister of Paradise