The jewels of Caserta: the Reggia and its Park 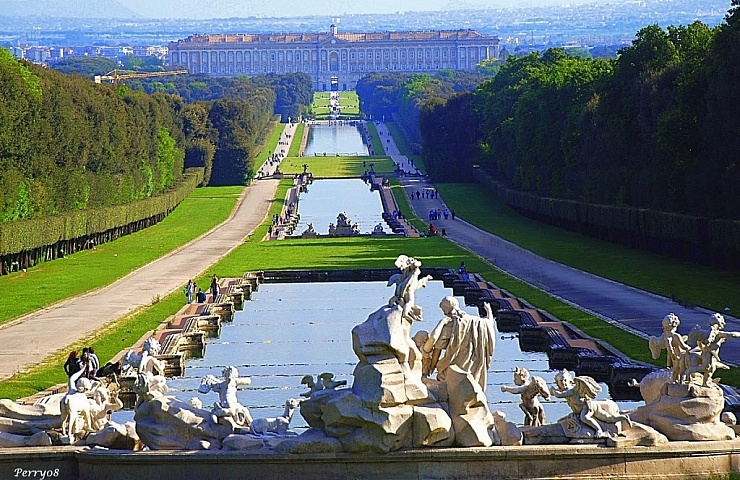 The Reggia of Caserta and its park are jewels of great splendor.

The Reggia (Royal Palace) was designed by Luigi Vanvitelli in the XVIII century, commissioned by Charles III of Bourbon. It is one of the most important works of the Neapolitan architect and represents the triumph of the Italian Baroque. We can say that it is an original fusion of other two royal residences: the Palace of Versailles in France and the Escorial Palace of Madrid in Spain.

The palace has also a wonderful park ahead. Therefore, it is a monumental complex of 45,000 m² for 36m of height.

Its rooms are enchanting. They are a succession of stuccos, bas-reliefs, frescoes, sculptures and inlaid floors. Those of the Astraea Room, Mars Room and Throne Room are remarkable. The latter is the biggest among the royal apartments.

At the entrance, we find a monumental honor staircase that joins the lower and the upper vestibules, from which you can enter the royal apartments.

The Palatine Chapel, designed by Vanvitelli even in its decorations, is surely the environment where the analogy with the model of Versailles emerges more strongly.

The theatre is a considerable example of eighteenth-century theatrical architecture. It is a horseshoe room, made solemn by the disposition of columns of huge order.

The Art Gallery is organized in a series of connected rooms. It hosts paintings depicting still lives, war events and portraits of the Bourbon family.

The Library is then annexed to the apartments of the Queen.  It is finely decorated with reliefs and frescoes, such as the one of the signs of the zodiac and constellations, made on drawing of Vanvitelli.

The Queen was a refined woman of great culture.

Integral part of the Royal Palace is the Park. It combines the tradition of the Italian Renaissance garden with solutions of André la Nôtre for the gardens of Versailles.

Along the central axis, there are basins, fountains and waterfalls, decorated with big sculpted groups.

The result is a scenery effect of great impact that reaches the top in the Great Waterfall.

The Park of the Royal Palace of Caserta puts together in an only place three centuries of landscape art.