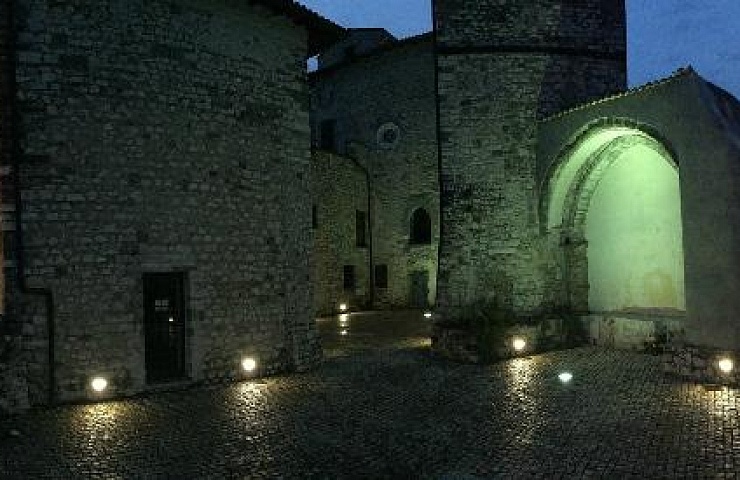 In Ceccano there is the evocative Castle of the Counts that has its roots in ancient times.

More precisely, in the VIII century A.D., the fortified tower, original heart of the entire structure, was erected. To simplify the reading, we can distinguish the history of the Castle of Ceccano into three building steps: Medieval Castle, Castle of the Colonna and Palace of end of 1800.

The most singular and relevant aspect of the Castle is inside it.

In the rooms, we can admire precious frescoes that are part of an iconographic patrimony and so rich in symbolic images that, in medieval age, acted as bearers of one of the most important religious messages: the work is the pain of the man for the sin of Adam, but at the same time it is also the only way to atone for it.

For this, these images were proposed almost exclusively in holy places, with the aim of inciting the work with the rhythms imposed by the nature, and so by God.

These examples of wall painting are exactly in the palatium and in the turris picta. On the walls of this last room, there is a fragmented frescoed pictorial cycle in the XIII century, representing originally an iconographic calendar with the months in sequential order on all the four walls of the room.

Of this calendar only the months of January and February remain, as indicated by the writings in Gothic characters that accompany the two personifications.

The latter are depicted both as peasants. The first (January) appears sat with heavy clothes while stretching the naked feet and the hands towards the flames of a brazier to look for relief from cold. The choice of this scene to represent January was necessary to indicate that during the coldest and most freezing season of the year for divine’s will, the man had to rest together with the nature.

The personification of February represents, instead, a peasant during the pruning of the vine with the hook. The clothes of the man, his standing position and his activity indicate the restart of the works with the change of the weather.

This representation of the months of January and February presents an iconography similar to that of the calendar of the Oratory of S. Pellegrino in Bominaco (AQ).

A comparison with this cycle of months is useful to have an idea of the lacking parts of the fresco of Ceccano.

For example, we can suppose that the month of March, lacking of the upper part, was about, as that of Bominaco, the topic of the cavaspino (a man sat who removes a thorn from his foot). Instead, in the remaining months, very likely, other activities were proposed, related to the cultivation of the vine and of the wheat, both because they were the most important cultivations of the whole agrarian year, and because from their fruits the wine and the bread, Eucharistic symbols, were obtained.