Hortus Conclusus: Artworks symbol of the tradition of Benevento 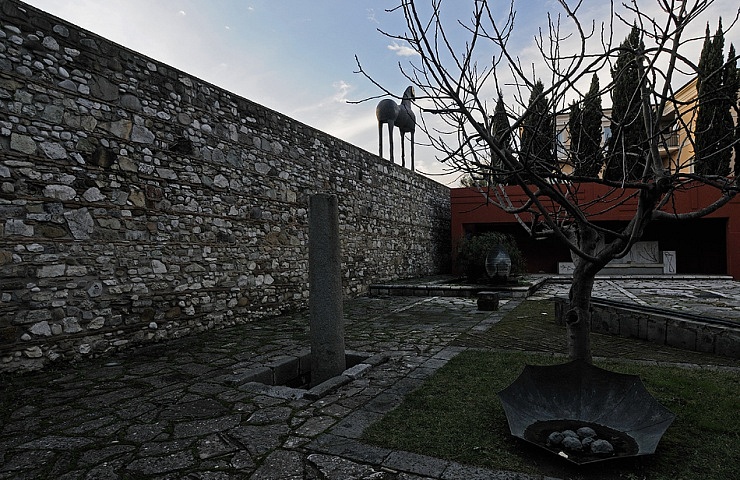 The Hortus Conclusus is an artistic installation by Domenico Paladino, leading figure of the Italian Transavantgarde, made in 1992 in collaboration with the architects Roberto Serino and Pasquale Palmieri and the designer Filippo Cannata.

The name Hortus Conclusus comes from the Latin and identifies a close garden, a secret and isolated place where the ascetics could get close to God through the meditation.

However, it is important to dwell on what the Hortus represents for the artist Paladino. In fact, it is the place of comfort of the eternal fight that every man lives in the real world as well as in their own inner being, looking for peace.

The Hortus is an invitation to undertake a personal memory path useful to reevaluate the past and oneself. We can say that the aim of Paladino has been to create a place where the interiority can go towards a harmony between Man and Nature, and makes it through myth and history. His aim is a ‘message of peace’.

The Hortus Conclusus is surrounded by the walls of the monastery of San Domenico in addition to walls inspired to the real walls of the town during the Lombard period. The floor remembers that of the ancient hamlets. Capitals and pediments accentuate the reference to the history of the town.

Therefore, the main element is the green that legitimates the name Hortus. Among the trees, we find roses, lilies and palms that symbolize the divine blood, the purity and the glory.

The inner artwork that has become its symbol is the bronze Horse, put on the top of the walls.

The horse seems to guard the Hortus from one part, and the lower part of the town from the other. The horse wears a golden mask like Agamemnon, which makes it almost divine and seems to evocate the myth of the Trojan horse. Traditionally, the horse represents also the companion of the man in the battles.

The other inner artworks are the Helmets and the Shield, which represent, them too, a reference to the historical details of the battles and of the defense of the town. The big disk works also as fountain: it makes flow the water that is gathered in a basin. A kind of metaphor of a water that seems to come directly from the daily life of the ancient times.

Among the various fountains, it arises, with its interesting details, one of the humanoid forms with the arms pushed out from which little heads appear. Many other heads are put on the upside down Umbrella and others are left free. Moreover, the Shell and the Ox head, which take inspiration from the history of the town, deserve to be mentioned.

The disseminated artworks are ‘Thought as a harmonious set that goes back over the history of the town with recalls to the passage of the Samnites, the Romans and the Lombards’. They get married with the remains of columns, capitals and broken pediments, creating a successful stylistic contrast.

The ‘Bronze Horse’ dominates the ‘Hortus’ from the top of the wall; the ‘Disk’ collocated at the center of the space, seems a shield fallen from the sky from which water gushes. Then the ‘Shell’, a ‘Bell’, a ‘Horse Head’, the ‘Ox Skull’, the ‘Helmets’: each symbol reinterprets in modern way the tradition of Benevento’. From ‘I luoghi del contemporaneo’ Gangemi, Rome 2012.

The building is used for concerts, conferences and theatrical performances.