History of the Amalfi Paper and its Museum 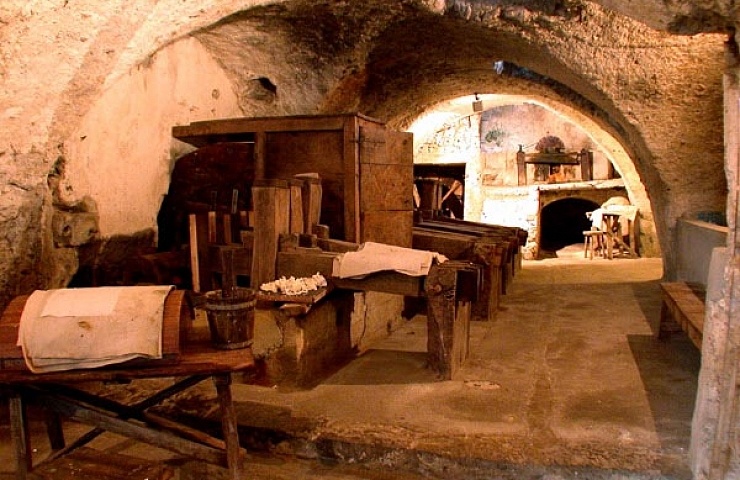 The museum of the Amalfi paper is the narration of an ancient tradition in one of the most evocative places of Italy.

The Amalfi people had learnt from the Arabs the techniques for the production of the paper, which at that time was called Bambagina paper. This name comes probably from the Arabic town El Mambig or, according to other thesis, from the cotton with the same name.

The Amalfi Paper, also called charta bambagina, was used for private writings, legal acts and revenue stamps too in Southern Italy, at the courts of the Angevins, the Aragonese, the Spanish viceroyalty and the Bourbon court.

The fame of the Amalfi paper arrived far away and many foreigners arrived in Naples to print their works on Amalfi paper.

There are not official documents that allow determining when the first paper mills were born. Nevertheless, it is possible to take as reference the year 1231, when Frederick II with the decretal laws published in Melfi, forbade the use of the bambagina paper in the public acts, and imposed their transcription on parchment.

The museum of the Amalfi paper stays in an ancient paper mill dating back to the XIV century.

In the museum, still today, you can find the centuries-old tools used in the production of the handmade paper.

They are stored the ancient wood trip hammers  that, activated by an hydraulic wheel, beat and ground the linoleum, cotton and hemp rags previously collected in the strong stone piles. The so obtained plant was picked up from the piles with suitable wood pulling tools and was plunged in the vat, diluting it with water.

The vat was a tank, internally covered with majolica, with such a height that permitted the standing worker the most comfortable position. The worker plunged in the vat a loom whose bottom was made of a tight stitches metallic net and collected a certain quantity of paste, distributing it in the mold. Drained the water, it remained a thin layer of paste. Then, the sheet was put on a wool felt and covered with another felt.

Many sheets, stacked together with the same procedure, were then put under a press to eliminate the remaining water.

In the paper mill-museum there are two, still functioning, dating back to 1700. After the pressing, the sheets were removed by the remover and put one on another creating the so-called posta.  Later, the poste were carried in the drying rooms (spanditoi) for the drying of the water.

Then, the sheets were pasted with a solution of animal gelatin and handy smoothed, after a careful selection depending on the quality.

The environment of the paper mill, in its stratifications, presents other more modern aspects.

In fact, in 1600, the trip hammer pile was substituted with the Olandesi, new machines capable to produce faster with lower costs.

The specimen existing in the paper mill, hydraulically activated, was installed on November 18, 1745, as it results from the scratched date on the plaster of a part. This manufacturing used, in place of the loom, a cylinder covered by metallic cloth half immersed in the paste of which it lifted a layer stuck to the surface. The layer removed automatically and passed through two felt rolls for the elimination of the water. This machine was called ‘round’ or ‘drum’.

The paper produced in sheets was then left drying in the spanditoi.

The Museum of the Paper has also an operative room, realized in an overlapped modern environment, where there is an exhibition of ancient tools for the manufacturing and preparation of the handmade paper.

Great importance and bibliographical value has the presence of sources and texts on the origins of the Amalfi Paper at the library of the museum.

Therefore, the museum of Amalfi is a jewel of industrial archaeology.