The National Archaeological Museum of Eboli 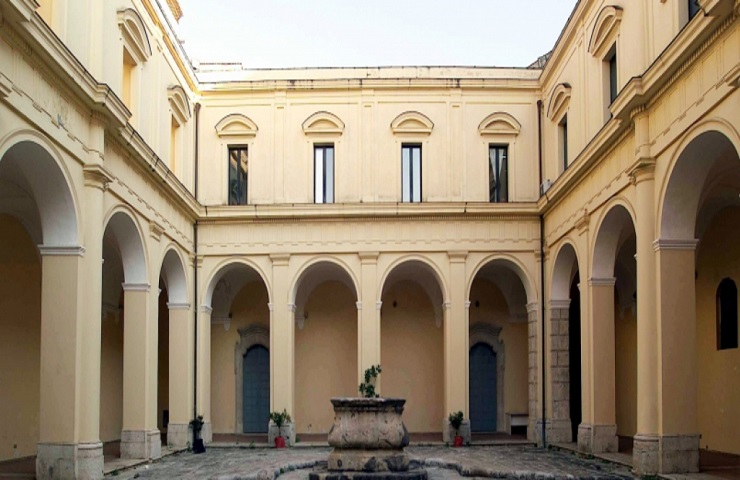 The National Archaeological Museum of Eboli and of the Media Valle del Sele stays in the Convent of Saint Francis.

Before the last World War, it was used as seat of the City Hall of Eboli. Nevertheless, after the bombardments, it was partially destroyed and abandoned.

Today, after having been restored and made available again, the Museum collects finds coming from the ancient center of Eboli, the hill of Montedoro and the archaeological site of San Vito al Sele. However, there are spaces reserved to other localities such as Campagna and Oliveto Citra.

The several rooms of the museum periodically host the thematic expositions connected to the research activities of the Museum. The itinerary brings the visitor through various phases of the history of the place: the prehistory, the iron age, the oriental period, the VI and V century BC.

In the entrance atrium, there is the Ebutina Stele, honorary statue with dedicated inscription.

In Room 1, there is the exposition dedicated to the phase of Prehistory and Protohistory. Here we can admire the most ancient testimonies of the Upper Neolithic and Final Neolithic coming from St. Cataldo area.

In Room 2, the finds of the Iron Age are exposed. The most numerous documents of the iron age in Eboli refer to a series of grave goods of particular richness. Men’s graves are characterized by the presence of bronze pins and weapons. Women’s ones have bronze jewels and amber and glassy stone necklaces. Rich also the presence of crockery and pottery decorated ‘a tenda’ (a series of triangles inserted one into another).

The first floor is dedicated to the period between the end of the VII and the VI century BC.

Even here, there is a rich selection of grave goods coming from the necropolises along the banks of the stream Tiranna and in the zone at the basis of Montedoro. In the goods, there are big containers with covers, ornamental objects and little vases. Among the found material, also numerous potteries in ‘bucchero’ of Etruscan-Campania production and vases with naming inscriptions in Etruscan language.

Room 4 has material referred to the period between the IV and the III century BC. Also here there are numerous grave goods. Men’s goods include entire armors, wine and meal vases in ceramic and bronze, tools for the fireplace and terracotta. Women’s ones have bronze and silver jewels, vases and the nuptial lebes. 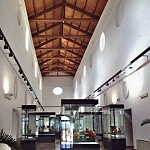 A view of one of the rooms of the National Archaeological Museum of Eboli.