The crypt of San Matteo and mysterious believes 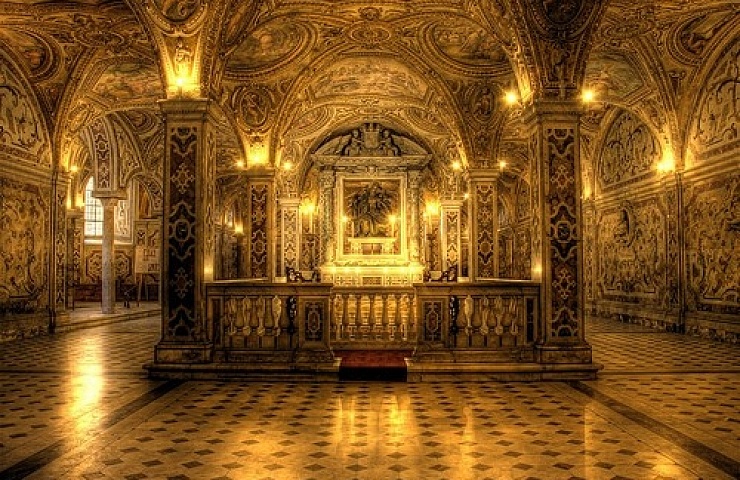 The Crypt is the first unit in the building of the Cathedral. It hides mysterious believes, but let we see first when it was born and how it is.

Since March 1081, the relics of San Matteo (Saint Matthew), of the martyr saints and of other saints were put down there as it is deduced by the several gravestones placed there, which demonstrate that on that date the building was already completed. The crypt, as we see it today, corresponds with the works carried out at the beginning of the 17th century by the architects Domenico Fontana and his son Giulio Cesare, who have exploited the centrality of the tomb of Saint Matthew, the holiest place of the entire church and around which all the other spaces rotate.

The polychrome marble altar is enriched on both the sides with an elegant canopy. In the center of the double canopy, two twin statues of St. Matthew realized by Michelangelo Naccherino in 1606 are placed. The Saint is depicted while he is writing the Gospel with a book laid on his left knee and a pen in the right hand. At his side, an angel hands him an inkpot.

In the crypt of the cathedral it is conserved the log on which, according to the tradition, the martyrs from Salerno, Gaius, Ante and Fortunato, were decapitated. Putting the ear on the block, it is still possible to hear the sound of blood that flows.

Moreover, in the crypt there are two twin statues of Saint Matthew, placed from behind to one another so that the face of the saint is visible in both the spaces in which the crypt is divided. This has given rise to a common saying used to speak ill of the people of Salerno: it is said that they have ‘two faces as Saint Matthew’, referring to the duplicity in the human relationships.