The Church of Santa Maria Assunta in Positano: between sacred legends and artworks 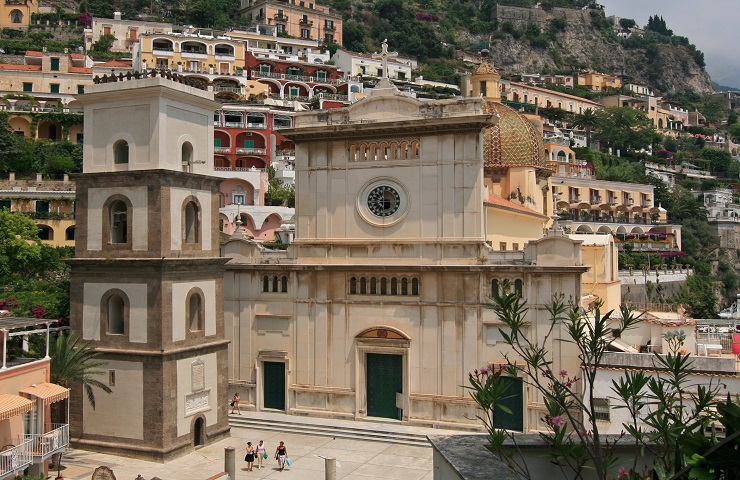 In Positano, pearl of the Amalfi Coast, along with the naturalistic beauties of the place, there are also numerous monuments of historical interest among which the Church of Santa Maria Assunta.

The history of the Church of Santa Maria Assunta is strictly connected with that of the Benedictine monastery of Saint Mary that, according to the tradition, would have been built when the byzantine icon of the Virgin Mary arrived in Positano.

According to the tradition once again, the byzantine icon arrived in Positano in the XII century thanks to the Benedictine friars who carried it in their ships while they were travelling the commercial and fishing routes along the coasts of the South of Italy, while the popular tradition wants that the icon arrived in Positano in a prodigious way. Nevertheless, there is no documentation about this thesis, apart from a little parchment that remembers the dedication of the Church to the Blessed Virgin Mary by John II Archbishop of Amalfi. For this reason, we are mainly brought to think, most likely, that the abbey was founded in the second half of the X century given that the first documented historical signs date back to the end of the XI century.

The history of the Church of Santa Maria Assunta is rather complex, characterized by the succession of a series of Benedictine abbots who led it, among which the names that stand out are the abbot Antonio Acciappaccia from Sorrento, the abbot Nicola Miroballi (then archbishop of Amalfi), but also Federico Borromeo and the Cardinal Vincenzo Maria Orsini, then become Pope Benedict XIII.

Nevertheless, this was not a flourishing period for the abbey. The latest commendatory abbot, Liborio Marra, in 1777, started the restoration works of the Church that lasted about five years and at the end, the Church could go back to its ancient splendor.

Inside, the Church of Santa Maria Assunta has three naves with five arches to whom, along the lateral naves, as many chapels for each side correspond. From the entrance towards the high altar, they follow one another the chapels of Saint Blaise, the Immaculate, Saint Anthony and Saint Anne (on the right) with the altar of the Circumcision; instead, the chapels of the Crucifix, of the Annunciation, of Saint Vitus and Saint Nicholas of Bari are on the left.

On the right of the high altar, there is also the chapel of Saint Stephen where the eighteenth-century statue of the Madonna with Child is guarded. Instead, near the Church, there is the tower bell built in 1707 on whose door it erects a medieval bas-relief with a memorial plaque of 1902 dedicated to Flavio Gioia from Positano, compass’ inventor. 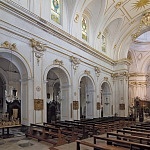 The inside of the Church of Santa Maria Assunta, in Positano.