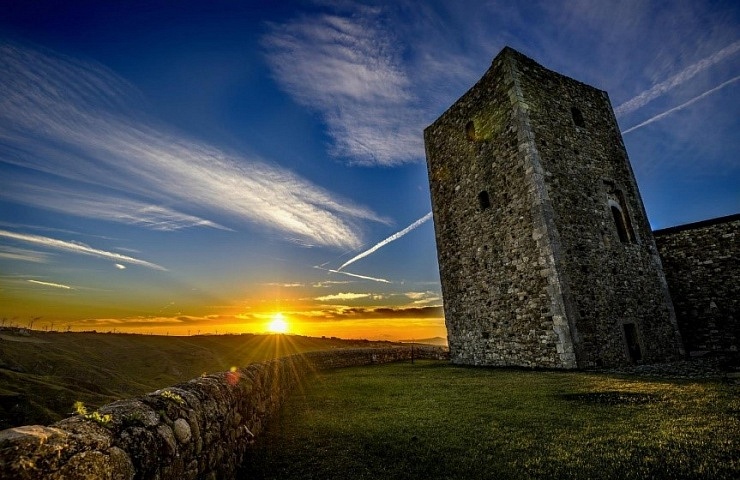 The history of the Ducal Castle of Bisaccia: from the Longobardic invasions, to hunting house of Frederick II, to sumptuous residence that hosted Torquato Tasso

The Ducal Castle of Bisaccia rises up on a buttress of the Calvary Mount. It was built by the Longobards around the second half of the VIII century. The first historical news date back to 1077, in a deed of gift it is mentioned a certain ‘Richard baron of Bisaccia’ as owner of the feud.

The Longobards ruled Bisaccia until the arrival of the Normans led by Robert of Hauteville. Destroyed by the earthquake of 1158, the castle was rebuilt around the end of the XIII century by Frederick II of Swabia.

Therefore, in 1246, the castle belonged personally to Frederick II and was hunting house in addition to temporary seat of the famous Sicilian Poetic School, constituted by the people of letters-officials of the court. After this latest date, the building was renovated and expanded: in particular, the tower, based on a preexisting ancient military plant, was elevated so that its highest part could be visually connected with the net of surrounding castles of Frederick until those of the adjacent Basilicata.

In 1462, Bisaccia was assigned by Ferrante of Aragon to Pirro Del Balzo, duke of Venosa. Then, in the ownership, his daughter Isabel, who married Frederick of Aragon, replaced him. In the XVI century, with the introduction of the gunpowder and firearms and at the same time of the general orientation of many adjacent castles, also the castle of Bisaccia was transformed into sumptuous noble residence.

The entrance gate of the first courtyard, the new environments around the second courtyard, the elegant loggia that dominates the staircase and the big panoramic colonnade on the upper floor made of twenty-eight arcades on small columns of decorated local stone, date back to this Renaissance period.

In 1533, Alfonso d’Avalos, to whom it had been assigned for services offered to the crown, sold the feud of Bisaccia for 3500 ducats to Giovan Battista Manso. In 1588, Torquato Tasso was guest of the Manso family, in the castle, to have a period of rest for the serious mental illness he suffered from. After a series of transfers of ownership, at the beginning of the XVII century, the castle with the feud of Bisaccia was bought by the Pignatelli family that owned it until the beginning of the XIX century. In 1851, the feud and the title of duke of Bisaccia were granted by the royal Bourbon court to Carlo Maria Sostene de la Rochefoucauld and to his legitimate heirs.

Lately, it has been inaugurated a museum that shows several archaeological finds among which those of the ‘Tomb of the Princess of Bisaccia’, attributable to the Iron Age (end of the IX-VII century BC).

The ‘Tomb of the Princess’ differs from the others above all for the precious inventory, adorned with valuable ceramics and jewels, elements that indicated a person belonging to an upper rank.