Castel Sant’Elmo: Testimonies and Legends of the prisons and the Pedamentina 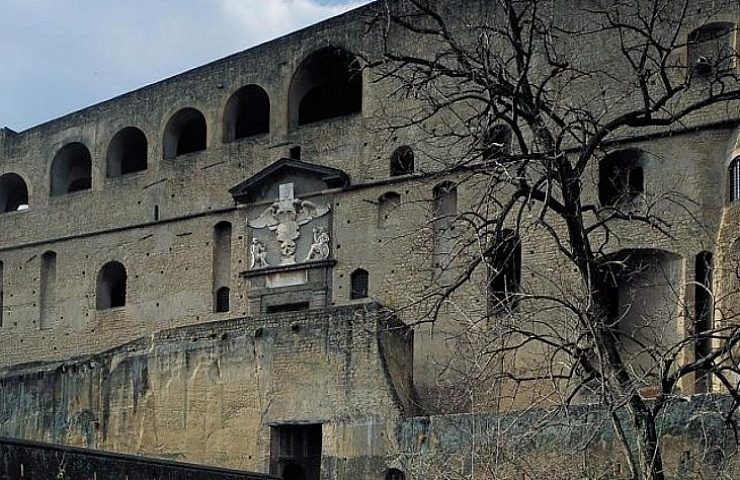 Castel Sant’Elmo is a medieval castle placed on the hill of the Vomero in Naples.

It was built on the trail of the ‘Belforte’ that Robert of Anjou had made build by Tino di Camaino in 1328.

For its peculiar position, Castel Sant’Elmo is one of the most representative places in the views of the town. Moreover, for its strong size and its absolute dominion, the Castle has been always seen by the Neapolitans with a sense of reverence.

History and legends combine around the Castle. Starting from its prisons. In fact, here, illustrious prisoners were locked up. Among them, Tommaso Campanella, the philosopher accused of heresy in 1604.

The Dominican friar was an inflexible rival of the official theological schools. When he was imprisoned in Castel Sant’Elmo, the captain Carlo Spinelli, prince of the Roccella, made his life even more difficult. Nevertheless, in this ordeal, Campanella had the strength to write some works and poems.

He wrote about himself:

‘(…) they broke me the veins and the arteries; and the spine lacerated my bones; the land drank ten pounds of my blood; healed after six months, in a pit I was buried, where there is no light, no air, but strong stink of humidity and night and infinite cold. (…)’

In March 1659, Giovanna di Capua, princess of Conca, was locked up in the prisons of Castel Sant’Elmo with her maid. The two women died poisoned on April 10.

‘(…) mysteriously her dirty life ended with venom, given her by her relatives in the food to get out of their way a such ugly monster who so contemptibly had dishonored them (…)’

In those prisons, also the patriots of the Bourbon uprisings were locked up in 1799.

Therefore, a legend tells about frightful whistles and shrill, piercing screams that could be heard in the basements in the night. Of these manifestations, several recordings would exist. It is supposed that they are noises produced by the wind in the underlying caves.

Along the Pedamentina, a little staircase that borders the entire hill on which the castle rises, instead, a ghost dressed in white would wander.

The singular characteristic is that it would seem a quite cheerful and joker ghost. In fact, its pastime would consist in scaring the others going in and out of a wall near the staircase, or with sudden shouts and laughs.

Linked to the staircase there is also another legend.

At the end of the first flight of the Pedamentina, in fact, there is an old gate. There, the royal guards killed all those who wanted to assault the castle. The corpses of the enemies were then left in the basements to be devoured by the mice. According to some evidences, the groans and the crying of these victims would be still audible in front of the gate.