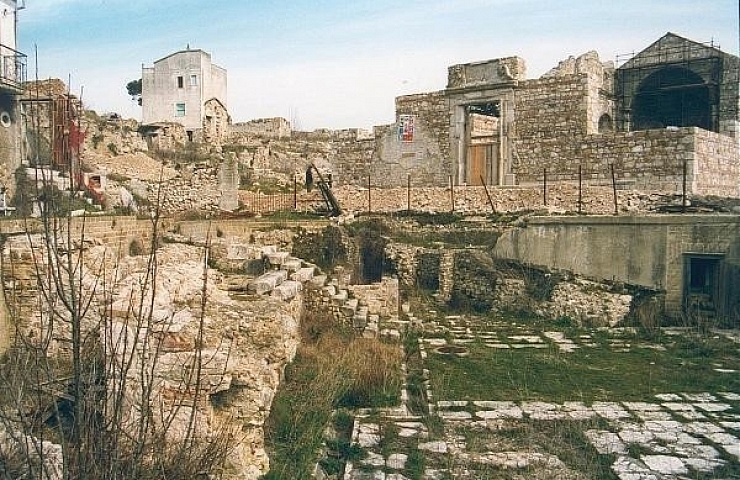 A visit to the Archaeological Park of Conza

The origins of Conza della Campania, little town almost completely abandoned after the earthquake of 1980, have very ancient origins. The ruins of the Roman town are reemerged under the ruins of the modern village of Conza, exactly after the earthquake. A project of excavation, restoration and enhancement has brought back to light a complex building stratification that represents more than 2000 years of history.

Visiting the Archaeological Park of Compsa (the ancient Conza), you are led by the lithostroton, the floor of calcareous slab, to imagine the life of the ancient forum…

On the hills of Conza and Ronza, the places of the faith and those of the temporal power have always animated and supported the life of the community. Also for the residential area of the ancient Compsa, the life was organized around the Cathedral and the Castle. In fact, it was around the two architectural buildings on the two hills that pulsated the existence of the local people.

At the entrance of the Archaeological Park of Compsa, we find a monumental cross of 1741, in the sign of the coat of arms of Conza, a turreted eagle lied on three hills, reproduced on one of the façades of the same. Of the ancient cathedral of the XVIII century erected on preexisting Romans and Medieval structures, you can appreciate interesting remains, the marble urn of the crypt is of Imperial Age; an interesting bas relief, included in the base of the tower bell, reproducing the door of the Urbis. Of the ancient thermal structure of the town, it remains a brick structure that stores near a stone sarcophagus reused as tank of a monumental fountain that preserves the Latin inscription partially decoded as dating back to the IV century AD.

Under the little square opposite to the Cathedral of Santa Maria Assunta, the excavations have brought to light a part of the forum of the Roman town, with two floor levels: the most ancient is in ‘opus spicatum’ (herringbone), in front of which there is a drain for the rainwaters in big calcareous blocks; in section it is recognizable the other floor in ‘opus tessellatum’ and cocciopesto (opus signinum). On the forum, it looks out the podium shaped in big blocks of limestone of a building, maybe a temple or anyway a public complex.

At the base of the tower bell, other excavations have put in the light a funeral stele of the first years of Christianity, finely decorated, to testify the sculptural refinement of that age in the religious art. Other structures have come to light in the rest of the town, under the basis of the buildings fallen down with the earthquake. In Via Forno, a Roman Domus has been rediscovered, with mosaic floors and a big cistern, deep more than 12 meters and wide 3.

Out of the town, in the quarter ‘Piano delle Briglie’, the theatre rose up; in the quarter Sanzano, then, there are the ruins of a Roman villa, accessible from a brick bridge that crosses the river Ofanto. Another Roman villa has been located in 1978 in locality Macello where a series of pit tombs of the VI-V century BC have been also discovered.