Abbey of Goleto, an harmony of different styles and languages 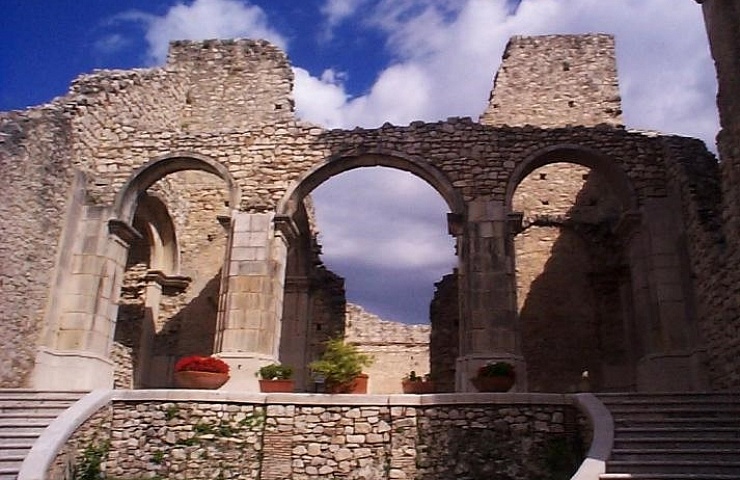 The Abbey of Goleto rose in 1333 and was founded by William of Vercelli, ascetic, hermit and saint. He dedicated most part of his life and his mission to Irpinia. Even the foundation of the Monastery of Montevergine owes to him (1126).

The cloistered nuns of the Abbey have given birth and impulse to the local community, enriching it with goods and wealth. In 1515 the latest abbess died. The following history of the monastery has seen a sequence of periods of alternate splendor supported also by the Benedictine monastic community of Montevergine.

The work of the nuns has brought to some of the most significant monuments of the monastic complex: the Febronia tower, real masterpiece of Romanesque art built with numerous stone blocks coming from a Roman mausoleum dedicated to Marco Paccio Marcello, takes its name from the Abbess who in 1152 commanded its building for defending the monastery, and the Chapel of Saint Luke, built in 1255 to host an important relic of the evangelist saint. It is the jewel of the abbey. You can reach it from an external staircase whose parapet ends with a snake-shaped handrail with a knob in the mouth. A pointed arch and a little six-light rose window are on top of the entrance gate.

On the front of the arch, an inscription reminds that the church was commissioned by Marina II. The inside is constituted by a square plant environment with two naves, covered by ogival rib vaults, which lay on two central columns and on ten half columns immersed in the perimeter walls. The octagonal bases of the columns and the capitals decorated with curved leaves, on two asymmetrical orders, present analogies with the sculpted works commissioned by Frederick II in Castel del Monte, in Apulia.

Outside, the structure is completed by two little apses held by shelves and, along the ledge of the crawl space, barbicans with animals’ heads and ornamental motifs. Of the numerous frescoes that enriched the chapel, they remains only two medallions, illustrating the abbesses Scolastica and Marina, and some episodes of Saint William’s life. For about two centuries, the monastic community had a strong influence in particular on Irpinia, Apulia and Basilicata, also thanks to the predilection and the protection that the Norman-Swabian aristocracy always had towards it. Nevertheless, starting from 1348, year of the black plague, it began a slow and inexorable decline that determined, on January 24, 1506, the suppression by Pope Julius II of the monastic community that, actually, happened with the death of the latest abbess in 1515.

With the end of the feminine community of Goleto, the monastery was joined to that of Montevergine, which guaranteed the presence of some friars. Since 1990, the Little Brothers of the Jesus Caritas Community, inspired by Charles De Foucauld, who take care of the spiritual animation of the Goleto complex that becomes more and more a point of reference for those who are thirsty for absolute.

Today, the visitor can admire the monastic complex, the Febronia tower, its two churches, the lower Romanesque funerary chapel, the upper chapel of Saint Luke, architectural artistic jewel, capable to make harmonically talk different styles and art languages: the Gothic-Apulian architecture, the circensian shapes, the Samnium-Irpinia sculpture. The big church by Vaccaro offers the view of a recently restored floor and, though without roof, represents an open-air scenery.