Rural traditions in Marcianise: from the port to the Menesta Mmaretata 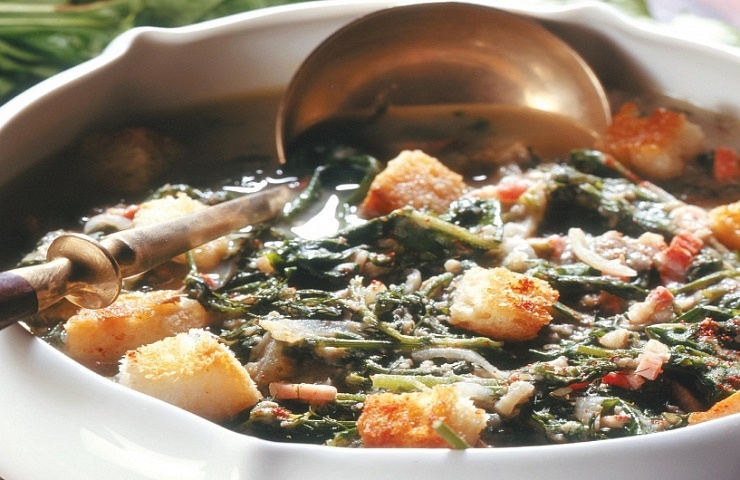 Marcianise is a Municipality in province of Caserta, famous for its Menesta mmaretata (married soup) that represents an Easter tradition.

To enter the essence of the tradition of Marcianise, simple and of rural memory, it is necessary to recover the tales of the animal present in the yards of the country families.

Its flesh has always represented an irreplaceable food reserve and has always been on the tables of the feasts. We are obviously talking about the pork.

The tastes of Marcianise are those of a very ancient tradition linked to the manufacturing and the conservation of the flesh of the pork in various forms.

These animals, bred by the farmers in family pigsties present in the courts, are fed with natural products and with all the leftovers of the domestic cooking, recycling the organic and turning it into precious fats and proteins. The pork, which only rarely passes one year of life – usually people say ‘o’ puorc camp n’ann’ (the pork lives one year) – is butchered in the yard of the house in the coldest months of the year, with artisan ancient methods. A sharp knife is given to the expert person, (‘o accira puorc’, the person who kills the pork) who with bloody wisdom, kills the animal and continues with the butchery of the flesh.

Nothing of the pork is thrown away, the old proverb says giving a clear message about the use of all the parts of this animal. The butchery is then a moment of mutual help between relatives and neighbors. At the end of the cutting, it is habit to offer meals to thank the people who have collaborated.

Therefore, the pork represents a large source of sustenance for the country families for a whole year. The conservation of the flesh is made in various ways: salted, cured, dried, smoked, filled, in oil, in lard.

Many typical products of the territory mirror the tradition of the manufacturing, preparation and conservation of the pork meat.

For example, the nnoglia (or doglia of pork), a typical cured meat obtained by the by-products of the manufacturing of the pork. They are used big and thick parts of the stomach and intestine cured with salt, chili pepper and wild fennel seeds, pressing, smoking and aging. Another typical product is the lard, obtained from the fat of the pork, usually conserved in the pork’s bladder.

We cannot leave out the cicoli, residual solid pieces, obtained from the squeezing of the lard. The pork sausage produced both in butcher shop and at home cut by hand. Finally, the lung sausage obtained from the second and third cuts of the pork: lungs, spleen, heart, liver, kidney, with addition of heated cotica (pork’s skin), cured with salt, chili pepper, wild fennel.

In the memories and the tales of this land, then, it is always present another typical food. The poor traditional dish a’ menesta mmaretata, with the parts of the pork boiled and degreased. Once, it was prepared on Easter Monday, but today it is present on the table on Easter.