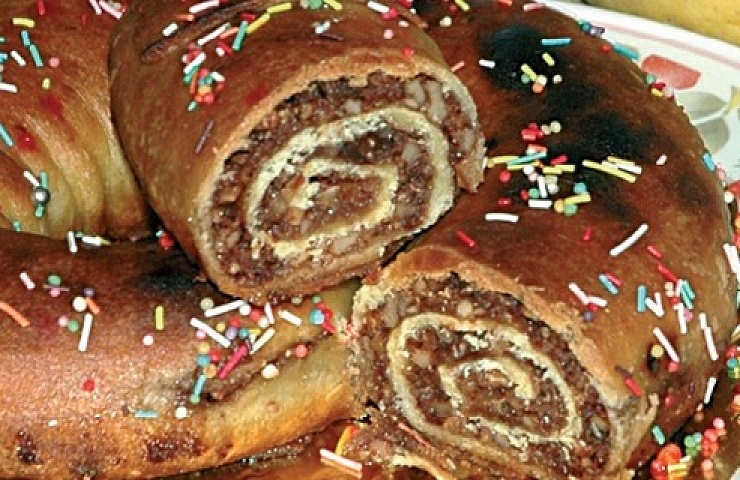 The pizza figliata of the province of Caserta has a really bizarre name.

First of all, the pizza figliata is not a pizza but a dessert. Somebody asserts that the nickname ‘figliata’ (meaning that it has made children) depends on the fact that it tends to break into many small honey balls. Others believe that it represents the annual cycle with its circular form, because it is made during the Christmas season.

Nevertheless, its origins are really deep and keep the tragedy of the Jewish tradition.

The researches underline origins that date back at least to the beginning of the XIX century. They arise above all affinities with a typical Jewish dessert, spread in Tuscany, whose origin dates back to the half of the XVII century.

In fact, in 1600, the Jews that lived in the zone were forced with an edict of the grand duke of Tuscany, Cosimo II de’ Medici, to leave their own houses to mass in a zone. The ‘ghetto’ was created in the shelter of the Synagogue.

The eviction was ordered by the Officer of Justice and the Notifier through the ritual gesture of knocking on the door with a stick.

The Jews in province of Pitigliano and Sorano, one hundred years later, wanted to remember the suffered impositions with the creation of this dessert that takes name and shape from this sad event.

The pizza figliata of the province of Caserta has a similar form, which therefore includes the allegory of the stick, even if then it is twisted in the shape of donut, open on one side, and so baked. It has an amber blond color and is made of thin dough filled with honey and mashed walnuts.

From the Christmas season, the dessert keeps until February, thanks to the presence of honey that preserves the taste.

Its preparation is an authentic ritual: the flour is kneaded with eggs, olive oil, sugar and white wine. The dough is handmade and left standing for about half hour. Then it is rolled out on a wood shelf with the help of a rolling pin to get an ellipsoidal dough, on which the walnuts, previously mashed, are distributed. Then, sugar, lemon and tangerine peels and honey are added. The rolled dough is baked in an oiled tray. Once cooled, it is sprinkled with honey and sugar.