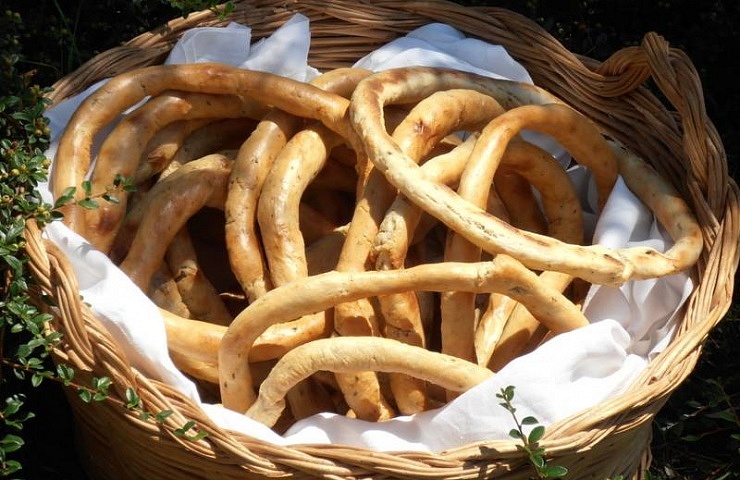 The Cookie of Sant’Angelo d’Alife (also called cookie of Saint Michael) is defined ‘culinary fossil’ because it expresses high symbolic and cultural meanings; for this reason, it has been included among the 44 traditional agricultural products of Region Campania with the Decree of June 5, 2014.

It is a veneration bread that joins the pagan and the Christian traditions. These cookies or taralli with a giant and circular shape, made with flour, water, natural yeast, the so-called ‘criscito’, wild fennel and salt, after the leavening, are boiled and cooked in wood oven. In the past, farmers and shepherds used to put them around an arm to eat during the work.

The Cookie of Saint Michael, with its millennial history, is an interesting example of survival of a very ancient offering-propitiatory worship in favor of the local protector divinity. On the offshoots of the Matese, near Sant’Angelo d’Alife, there is a little cave dedicated to Archangel Michael, where from time immemorial, on September 29 every year, the rites in honor of Saint Michael Archangel are celebrated and the traditional Cookies are offered to the presents.

The ingredients with whom they are realized are poor and simple: wheat flour, water, wild fennel seeds and ‘criscito’ (yeast). This is a different cookie since it is not crumbly and it is not so easy to break it. Biscotto in Italian means cooked twice: in fact, before being cooked in wood oven, it is immersed and browned for some minutes in steaming water, to give it a smoother aspect on the surface.

This characteristic procedure makes this product similar to the better-known Pretzel of the Germanic culture, obtained through a very similar process and abundantly eaten during the Oktoberfest, which is held in the same period. To strengthen this hypothesis it is enough to notice that the name Pretzel comes from the Latin braccellum, little arms, reminded by the typical form folded as a cross that denote its original ritual function. Moreover, exactly as it happens for the Cookie of Sant’Angelo d’Alife, which is put around the arms, also the Pretzel is worn by the participants in the rite, hung to their neck.